Catch them now, before they're cancelled


We're officially in the Fall season, and you know what that means. No, not the start of another school year, it's something far more important than that. It's time for the start of the new television season.

There are plenty of popular series set to return to the boob tube over the coming weeks, including “Grey's Anatomy,” “The Office” and “Survivor.” But I'm here to tell you about a few brand new shows set to hit the airwaves.

Kid Nation
Wednesdays at 8 p.m. on CBS (premiered Sept. 19th)
This just might be the greatest premise ever for a television show. Forty groups of parents have decided they don't want to pay for daycare or summer camp, and have lent their kids to CBS. Forty children, between eight and 15-years-old are abandoned in an old west town and are given the task of rebuilding it to its former glory.

In the first episode, the kids were broken into four groups, and after competing in a challenge, were assigned responsibilities based on how they finished. Luckily for the group, the ten and eleven-year-olds handled the cooking. Also, at the end of each episode, the children have the option to go home. Only an eight-year-old wuss...pardon me, little boy, took them up on that offer. I wholeheartedly endorse this program.

Chuck
Mondays at 8 p.m. on NBC (premiered Sept. 24th)
This comedy has the potential to be the biggest hit of all the debuting shows. Chuck, a computer nerd who works at a big box electronics store, leads a normal life — until he receives an email that implants government secrets into his brain. If he was running Norton Antivirus that wouldn't have happened — he should have known better, he is a computer nerd after all. Chuck uses this information to help the government deal with terrorist threats — while still managing to keep his new life a secret from his loved ones and co-workers.

Bionic Woman
Wednesdays at 9 p.m. on NBC (premiered Sept. 26th)
This one is a remake of a popular series from the late 1970s. A woman is left for dead after a car wreck, but undergoes a life saving (and altering) procedure. She is given bionic arms, legs, and an eye. I'm sure she was also given a bionic breast augmentation and some bionic liposuction while she was under as well. This one should be a big hit with sci-fi lovers. 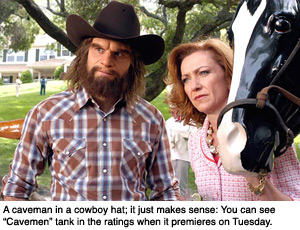 Cavemen
Tuesdays at 8 p.m. on ABC (beginning Oct. 2nd)
“Cavemen” is based on a series of Geico Insurance ads. It features a group of Neanderthals struggling with modern day life. I liked this the first time I saw it — when it was called “Growing Pains.”

Pushing Daisies
Wednesdays at 8 p.m. on ABC (beginning Oct. 3rd)
Much like the other shows I have mentioned, this one has an unusual premise. A man learns that he has the ability to make the dead live again, just by touching them. I'm not sure how he discovers this, but it should make for an interesting moment in the first episode. It sounds like a great gift, but his gift can also cause the living to die. Whatever happened to simple TV shows about men who live with two women and have to pretend they are gay?

Samantha Who?
Mondays at 8:30 p.m. on ABC (beginning Oct. 15th)
Christina “Kelly Bundy” Applegate returns to television as a Samantha, a woman who develops amnesia after being involved in a car accident — perhaps the same one that poor Bionic Woman was a part of. After waking up from an eight-day coma, Samantha learns that she was not particularly popular, and tries very hard to become a better person after being given a second chance.