“Hitman: My Real Life in the Cartoon World of Wrestling” by Bret Hart

What? I'm actually doing a book review? Yes, I actually spent time away from playing “Rockband” and “Super Mario Galaxy” this holiday season to spend time with Bret Hart's amazing autobiography. I don't know if it is because I love wrestling, but I just couldn't put this book down. I read it in less than a week in large chunks because every time I closed it and moved onto some other form of entertainment, I kept wondering what Bret was going to comment on next in the world of wrestling and if he'd finally get some peace in the Hart household. 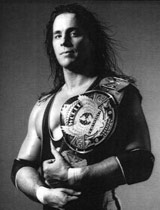 Bret's book takes you completely through his life. He starts out by talking about what it was like living in a household with so many brothers and sisters while his father not only traveled a lot promoting and being involved with wrestling (and Stu Hart's own Stampede Wrestling organization) but also what it was like to hear people scream while Stu trained them downstairs in “the dungeon.”

Bret then moves onto how he got involved with his father's company and then following his brother across the globe to participate in foreign wresting promotions.

As Bret matures, his love for the business, the art/style of wrestling and the ladies all grow considerably. It is interesting that Bret was supposed to wrestle at a (then WWF) event (now WWE) that was taking place at Madison Square Garden when Vince McMahon said that he wasn't a big enough name to wrestle there.

Bret talks about life starting out in the WWF. He tells all about how wrestlers acted on and off the road, all the drugs, drinking and partying they all did and what the “real life” versions of the wrestlers were like.

Of course, the part that I couldn't wait for was his account of the Attitude Era of Raw and how vulgarity, exploitation and sex took over the traditional storytelling in sports entertainment. I knew that DX was a huge influence on McMahon but never to the point that Bret claims. Shawn Michaels comes off even more as a whiny, spoiled little bitch. Yes, HBK can wrestle and is talented (and Bret does acknowledge that) but how he acts (or probably has acted considering he's now “found God”) is despicable and I can say the same for a couple of other HUGE stars after reading Bret's book (Hulk Hogan, Ultimate Warrior, and Kevin Nash, just to name a few).

We move onto Bret's life after the famous Montreal screw job when he departed to WCW. WCW had no idea what to do with Bret and that company was in huge trouble by the time he got there. Bret gets injured in WCW and suffers a concussion courtesy of Bill Goldberg. Bret continues to do what he's asked and shows that he's a company man but aggravates his injury even further.

The last quarter of the book deals with Bret trying to live with his injury, his divorce, others dying that he knew in the business and all the anger and hatred within his own family.

With all my other forms of entertainment available in my house and the options to go and do things outside the house during the break, I always came back to this book. It's a great read, insightful, and pulls out some real emotions. This book was so great that I even went out and purchased the Bret Hart career retrospective DVD that WWE released in conjunction with Bret. Wrestling and non-wrestling fans should definitely pick this one up.