Top o' the morning to you! St. Patrick's Day is fast approaching, and you've got a decision to make. Do you want to stand in a ridiculously long lineup just for the small chance you might get into a bar, or do you want to enjoy yourself in the comfort of your home, watching the finest Cinema Connoisseur endorsed, St. Patrick's Day themed films? I'm going to assume you chose the second option (although that long lineup comment certainly doesn't apply to the FSU's St. Patrick's Day Pub in Forwell Hall this Tuesday).

Here is a list of terrific films that deal with everything that St. Patrick's Day means to me — that being booze and little people.

Leprechaun 1 through 6
They made six of these films, which means they have to be good, right? Well, they're not just good, they are fantastic. The series follows a demonic leprechaun as he wreaks havoc through many periods of time. Warwick Davis (perhaps best known as Filius Flitwick from the Harry Potter film series) delivers a six times in a lifetime performance as the demented and devilishly clever leprechaun. My personal favourite is the original, starring Jennifer Aniston, just a year before she got her big break on “Friends.” Not wanting the franchise to get stale, the writers sent the little sumbitch into space for the fourth installment, appropriately titled Leprechaun in Space. Where do you go after heading to space? The hood, of course! The fifth and sixth installments see the leprechaun mixing it up with Ice-T, Coolio and some dirty whores in Compton. Equally scary and funny, the leprechaun series should be watched in its entirety this Tuesday. 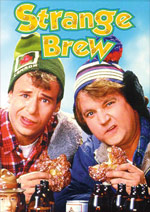 Strange Brew
Canadian icons Doug and Bob McKenzie of “SCTV” fame star in this Canadian classic as two brothers who give away their father's beer money, and in their efforts to make amends, end up embroiled in a mind control scheme run by an evil Brewmaster. While the film is quintessentially Canadian, with plenty of toques, hockey and “Eh” utterances, you should not wait until July 1st — crack open a stubby and press play.

Legend of the Drunken Master
After you've downed a few pints this Tuesday, you may find yourself getting in the mood for a fight. You may also discover that you are actually a better fighter drunk than sober. That is certainly the case for Jackie Chan's character in this film, who is a practitioner of the drunken boxing style of fighting. This film features some of the most incredible fights you will ever see not involving Michael Vick and a Rottweiler. I can't think of a better way to celebrate the Irish than watching a Jackie Chan film.

Beerfest
If you have time to watch a ninth film this St. Patty's Day, make it the Beerfest. A pair of brothers travel to Germany to spread the ashes of their deceased grandfather. While abroad, they discover an event called Beerfest, which includes activities such as Beer Pong, quarters and good old-fashioned chugging. The head of the tournament, Baron Wolfgang von Wolfhausen claims that their grandfather stole his beer recipe, and proceeds to humiliate them. The brothers plan to earn their self respect back by assembling their own Beerfest team, which is made up of a ragtag group of individuals. Do they somehow gel and manage to overcome all the odds? You'll have to watch it to find out. This one co-stars Canadian legend Donald Sutherland, although an appearance by his son Kiefer would probably be more appropriate considering the subject matter.