Over the long and storied history of filmmaking there have been some truly electric screen duos. Ginger Rogers and Fred Astaire. Spencer Tracy and Katherine Hepburn. Keanu Reeves and Patrick Swayze. Lindsay Lohan and Tyra Banks. Yes, that's correct - Lindsay Lohan and Tyra Banks made a film together. This week I'll be taking a look at Life-Size, the 2000 film that launched the careers of two of Hollywood's most talented and down to earth personalities. 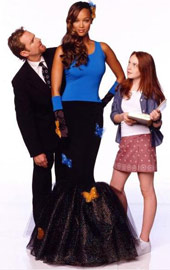 In Life-Size, a fresh faced and squeaky clean Lindsay Lohan plays Casey, a young girl who has recently lost her mother. She has distanced herself from her friends, and her relationship with her father Ben has also become strained. Ben has been spending a lot of time at the office, trying to make partner at his law firm. As a result, Casey, who is the quarterback for her football team, is left looking at an empty seat in the bleachers.

On Casey's birthday, she receives an “Eve” doll from one of Ben's co-workers. Eve is a fashion doll in the same vein as Barbie. The tom-boyish Casey does not appreciate this — she would rather be playing with a Peyton Manning doll I suppose.

Casey is not dealing well with the loss of her mother, and begins to look for ways to bring her back. She gets her hands on a book of spells and next thing you know, Lohan is waking up beside Tyra Banks in bed — and not as the result of an all-night booze and cocaine binge at a Miami night club.

You see, instead of bringing Casey's mom back, the spell has brought the Eve doll to life! As a result, wackiness ensues. Eve (Tyra Banks) quickly becomes a part of the family, much to Casey's dismay. Citing experience as an astronaut, police officer and lawyer, Eve even lands a job at Ben's law firm — for a few hours anyways.

It is clear to everyone that something is not quite right with Eve. Clear to everyone but Ben that is. It isn't long before he begins to fall for her. This is one of the rare cases where a man desires a woman more after her breasts go from plastic to real.

While everyone grows to love Eve (thanks to an impromptu dance number and a zany dress trying-on montage), the fact remains that Eve is in a world she does not belong. However, in her short time in the world of flesh (which I believe is the name of a bar located on Dundas Street), Eve truly makes the people around her better, and can only become a better inanimate object as a result.

I have only ever seen one Lohan film before (Mean Girls), and have never seen any of Tyra Banks' two most famous vehicles (The Tyra Banks Show and America's Next Top Model). However, if this movie is any indication of the quality of the rest of their work, I've got some serious catching up to do.

You also have some serious catching up to do if you haven't seen Life-Size. Luckily, the entire film is available in nine parts on Youtube. Normally I would encourage you to buy the film, but it originally premiered on television anyways, so feel free to steal it. Besides, you may have a hard time tracking it down at Best Buy anyways, as all copies were surely snatched up right away.