We live in a world where physical appearances are valued very highly. So it makes sense then that one's appearance is tied in quite closely with one's self esteem. People will often go to great lengths to enhance their outer beauty. This can often lead to tragic circumstances, but it can also lead to hilarious ones as well, as can be seen in this week's selection, Bald.

In Bald, the life of college student Andrew Wood hits the skids when he gets the boot from school due to lack of funds. What's even more concerning for Andrew, however, is that he is rapidly losing his hair. Despite the fact that he resembles the product of a romantic tryst between Jay Leno and a sewer rat, Andrew feels the only thing holding him back from making it with the ladies is his hair.

So Andrew needs cash for tuition and a hair transplant. That means one thing — Internet scheme! Andrew's enterprising buddy Max comes up with the revolutionary idea of getting all of the attractive girls at their school to strip down in front of webcams. In a short period of time, they become millionaires. You know, I think we are going to be seeing an increase in naked ladies on the Internet as a result of this film. I must offer a word of warning to eager entrepreneurs however — you're not all going to become instant millionaires. Sure most of you will, but others will be lucky to eke out a modest income that allows you to support your family and live debt free.

Not only is Max raking in the dough, he also has landed the girl of his dreams even before getting the transplant. She is able to see past Andrew's thinning hairline, and general unattractiveness, and see the beauty inside of him. He truly is a kind- hearted soul, giving employment to all of those sexy girls, allowing them to make something of themselves. What a heartwarming message, particularly for this holiday season. 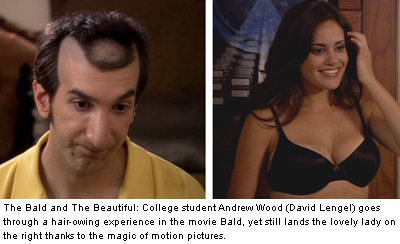 Things aren't all hunky dory however. Several of the girls' parents get wind of this enterprise, and come looking for Andrew and Max's hides. Now many scripts would call for the two sides to sit down and talk the situation over rationally. Well, Bald is not your average film. Instead, the youngsters booby trap their headquarters to stop the parental onslaught. Why talk to mommy and daddy when you can fire tennis balls out of a cannon at them? This sequence is reminiscent of Home Alone, although it is somewhat less wholesome.

I must extend kudos to scribe Blake Leibel for his superior writing on this film. If Mark Twain, William Shakespeare and Stephen King were sequestered in a room together for months, they could not come up with a script half as good as this one. Andrew's hairline may be thin, but the plot of this film is surely not.

Not only is the plot of Bald enthralling, but so is the acting. Particularly outstanding was pro wrestler Diamond Dallas Page as angry parent Huge Bruce, and Lisa Gleave as Shirtless Cynthia. She is called this because she is topless throughout, usually with hair or some other object strategically covering the goods. Ms. Gleave has a bright future in this business — she reminds me of a young, shirtless Meryl Streep.

Bald is the first film from Big Up Entertainment Films, which was founded by former NHL player Anson Carter. Though Carter scored 202 goals and 421 points during his NHL career with teams such as the Edmonton Oilers and Vancouver Canucks, there is little doubt that his proudest accomplishment is this film. Bald in his Stanley Cup — I'm sure he hoisted the DVD above his head and skated around with it.

There have been many hair themed movies over the years. In the 1970s we saw Warren Beatty as a hairdresser in Shampoo. We also saw a film adaptation of the famous musical Hair. More recently Johnny Depp played a demented barber in Sweeney Todd, and John Travolta cross- dressed in Hairspray. After viewing Bald, I can tell you that it stands head and shoulders above these films. Step aside Barbershop 2 — Bald can now claim the title of the finest follicle focused feature film. To say that Bald is anything less than sensational would be a bald-faced lie.