One of the biggest stars in the history of the wrestling business, “Stone Cold” Steve Austin is back stomping mudholes in asses and walking them dry. These days however, he's doing it on the silver screen, not in the wrestling ring. Austin stars in the new to home video release Damage, which has quickly become one of my all-time favourites.

Austin stars as John Brickner, a man who is fresh out of prison. Brickner killed a man to end up in the slammer, and hopes to make amends now that he has been released. He works as a construction worker by day, and a bouncer by night, earning a meager income while keeping his nose clean. 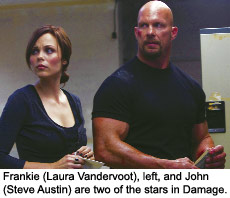 Brickner's life gets more complicated once again however when he learns that the daughter of the man he killed needs a heart transplant. Unfortunately Barack Obama wasn't around at the time to give everyone health insurance, so this girl and her mother don't have a lot of options.

The girl's mother comes to Brickner and basically demands that he help out, since he is the reason her husband isn't around anymore. So Brickner, who was trying to put his life on the straight and narrow path, must delve into some questionable situations to raise the $250,000 necessary for the operation.

Luckily Brickner is quite adept at fisticuffs, which catches the eye of the somewhat shady Reno, and his girlfriend Frankie. Reno is heavily involved in the world of underground fighting, and sees Brickner as his latest meal ticket. This leads to several explosive fight scenes in the film, each taking place in a unique setting. One takes place in a drained out swimming pool, one sees the fighters surrounded by cars, and one even sees them surrounded by dogs. No truth to the rumour that Michael Vick was a co-writer of the film.

From there it is two steps forward, two steps back for Brickner, as more obstacles get thrown in the way of his quest to help a dying girl. Redemption, atonement, friendship and loyalty are all themes central to Damage. Of course if you're not into all of that, you can at least enjoy the kick ass fights. Think Fight Club turned up another notch.

Austin was terrific in this movie. On the surface, it may seem like a similar character to the one he played in his first film, The Condemned. But this is a far meatier role — Austin has a lot more to say this time around, and he is surrounded by some very good supporting actors. In the “Making of Damage” feature included in the DVD extras, the other actors and behind the camera personnel are quick to offer praise for Austin's hard work and humbleness. Austin is equally respectful of his cast mates, saying he was surrounded by people better than him. That may be the case now, with only a handful of films under his belt, but years from now I think it will be Austin who becomes the wrestling world's biggest film star, especially if The Rock keeps cranking out gems like The Tooth Fairy.

Also included in the making of feature is a closer look into the different fights showcased in the film. The movie was filmed in British Columbia, and several of the fights were actually filmed in locations where real-life illegal fighting takes place.

So I loved the film, and I enjoyed the making of feature. However, I have to say, Damage is not for everyone. For example, children shouldn't watch it. Unless of course you want your children exposed to images of men being beaten half to death. In which case, some people should probably be coming to your door and taking those children away from you. Also, this is probably a film that will appeal far more to men than women. The testosterone levels are off the charts in this one. I grew a beard while watching it.

If you're not a child, and not too squeamish, then Damage is one that I wholeheartedly recommend adding to your video collection. It has elements of the Patrick Swayze classic Road House, as well as the aforementioned Fight Club and The Condemned. So if you liked those films, then you will surely enjoy Damage. And if you don't like those films, then you're just an idiot. And that's the bottom line, cause the Cinema Connoisseur said so!