Although $3 million can buy over 50,000 60 oz bottles of Absolut Vodka, almost 90,000 cases of Coors Light or countless boxes of Kraft Dinner, Fanshawe students donated their millions toward the college's Capital Campaign.

On behalf of the student body, FSU President Melissa Smart announced the donation in early December 2005. She said the contribution would be given to the campaign in yearly installments until 2010 through the Student Campus Improvement Fee and Development Fee, which are incorporated into the tuition of all 11,000 full-time students.

“[This] announcement is special because we are here to tell you about the single largest gift, at least to date, that has been made to our campaign,” said Howard Rundle, President of Fanshawe College, who added that the donation would go towards new building facilities as well as security systems upgrades.

With a goal aimed at raising $15 million by the end of this year, the Capital Campaign was established in early 2004 to ensure Fanshawe's ability to meet industry and economic demands through support enhancement and renovations. 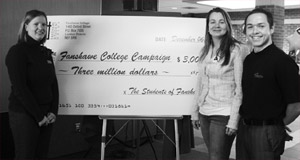 Smart said the donation, which began filtering out of the fees during the 2003/2004 school year, will effectively cost each full-time student $20 a year until 2010.

For the 2005/2006 school year the average Fanshawe student paid approximately $1818.28 in tuition and $683.90 in compulsory fees, which support Health Services, technology on campus, athletics and other expenses.

“This donation… shows that Fanshawe students care about their education and they care about the quality of it, so they can be the best they can be,” Smart said during the announcement. “It will be used to build a stronger future for all students at Fanshawe.”

FSU Business Manager, Paul Masse, said the $3 million amount is an estimate of how much the Student Campus Improvement Fee and Development Fee will bring in until 2010, when the fees will be terminated.

“A $3 million gift is unheard of in a campaign this size,” said Capital Campaign Chair, Bob Siskid, who was also present at the announcement.

Smart said former FSU president Keith Allan and SAC representatives negotiated the fees on behalf of the student body during the 2002/2003 school year.

One tangible result of the funds can already be seen in the newly constructed Centre for Construction Trades and Technology, which officially opened in October 2005. Due to the lack of skilled trade workers in Ontario, as well as in Canada, Fanshawe will be committing a significant portion of the Capital Campaign funds to supporting the apprenticeship program at Fanshawe.

“It's not just about physical growth,” Rundle said. “The reputation of the college in all acres of the province has grown immensely, thanks to our graduates who are making their mark in Ontario's economy.”

“[Students] care about their education,” Smart added. “They care about having the best facilities.”