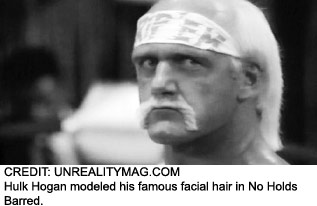 
Movember is upon us. No, that is not a typo. Movember is a campaign where men grow facial hair and raise awareness of prostate cancer. The Fanshawe Student Union is running a Movember campaign, so if you see a lot of 'staches over the next few weeks on campus, don't be alarmed — you have not been transported back to the 1970s.

In honour of Movember, I thought I would take a look at a few films starring some of the finest moustaches of all time. Watch these films and gain a little inspiration for you own Movember moustache.

Cannonball Run (1981) — Burt Reynolds has to be one of the most famous mustachioed men in history. His moustache has been romantically linked to some of Hollywood's most desirable leading ladies — it is basically the ultimate sign of masculinity. In the screwball comedy Cannonball Run, Reynolds and his two main sidekicks (his moustache and Dom DeLuise) are involved in a crosscountry race, competing against some of the biggest stars in Hollywood (at the time), including Farrah Fawcett, Jackie Chan, Sammy Davis Jr. and Roger Moore. This classic comedy is a good time for all, light and breezy enough to not distract you from what you should be focusing on — that being the moustache.

Three Men and a Baby (1987) — The Tom Selleck verus Burt Reynolds moustache wars are legendary. Just like Twilight fans are on either Team Edward or Team Jacob, facial hair aficionados are either on Team Reynolds or Team Selleck. While perhaps best known for his work on television's Magnum, P.I., Selleck starred in the 1987 box office hit Three Men and a Baby, alongside Ted Danson and Steve Guttenberg. Three carefree bachelors' lives are turned upside down when a baby is left on their doorstep. This heartwarming tale is sure to delight any fans of babies or moustaches.

Roadhouse (1989) — Quite simply one of the finest films ever produced. While Patrick Swayze is undeniably the star of this movie, he does benefit greatly from the presence of both Sam Elliott and his moustache. Elliott and his horseshoe moustache are along for the ride as Swayze's character tries to turn a crime-ridden hellhole of a tavern into a respectable drinking establishment. Without Elliott's moustache the film would get five out of five stars; with it, I give it seven out of five.

No Holds Barred (1989) — Hulk Hogan's facial hair is the undisputed world heavyweight champion of moustaches. Hogan was billed in his 1980s heyday as weighing 302 pounds. Sources say the moustache alone made up 28 pounds of that total. In his first starring role, Hogan played Rip, a professional wrestler. Rip is offered a contract by a television executive to move over to his network, but refuses. So the evil executive launches his own tough man competition and finds Zeus, a very large man who sets his sights on Rip, leading to a thrilling clash of the titans. An iconic film and an immortal moustache.

My apologies to fans of Charlie Chaplin. While Mr. Chaplin has starred in several notable films, his “toothbrush” style of moustache was unfortunately ruined by a nasty Austrian man. I wouldn't recommend anyone try to mimic Chaplin's facial hair.