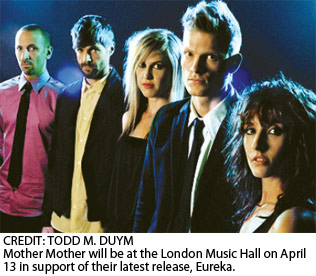 
Diversity is a concept as present in Canadian music as it is in our people, and thankfully, there is a lot to choose from when choosing music to accompany our day-today lives.

Few acts touring around the country are as compelling to listen to as B.C.'s Mother Mother. While many acts on the road lately stick to particular genres, Mother Mother is unique in melding many forms of music and texture together into a sound they're creating for themselves.

"I think the vision is pretty simple — just try to write good songs, and strong melodies," said Ryan Guldemond, the band's guitarist and lead vocalist. "Lyrics that you can represent honestly, on a nightly basis. Beyond that, we try not to get too heavy. We try to make those basic elements strong in each song."

If it seems like modesty, it's because it is; though Guldemond may not admit it, Mother Mother have been creating brilliant music since their start some five years ago in B.C.

That brilliance is evident on Eureka, their third and latest album, released March 15 on Last Gang Records. Clocking in just over 50 minutes long, Eureka is musical alchemy; the band — comprised of Guldemond (guitar, vocals), his sister Molly Guldemond (synthesizer, vocals), Jasmin Parkin (keys, vocals), Jeremy Page (bass, horns) and Ali Siadat (drums) — have taken the sum of their instruments and made some pure gold.

"I think there's an attitude that exists in all of our repertoire, lyrically especially," Guldemond explained, modestly addressing the album's content. "It's not somewhat purposeful, but I think the lyrics and the message, if there is one, is to just shine a light on the insanity of mundanity. I don't really like to get too cerebral with the concepts."

Describing the music on Eureka is easier said than done; Mother Mother are best described as Canada's answer to the Talking Heads, with vocals reminiscent of Queen — the three singers are all quite gifted, and support each other while not being afraid of being powerful or taking chances.

"We are getting into a groove in which we know what works, and know what doesn't work a lot of the time," Guldemond said, when asked about the writing process behind the vocals.

"There's much trial and error with harmonies, and singing, and when it doesn't work, it really doesn't. And when it does, it's like a gift that's been handed to you. But there's not a lot of middle ground with the process, it's either painful or very pleasing."

Mother Mother combine impressive vocal work with refreshingly original music, all the while keeping the sum of their parts from washing each other out — listening to Eureka is a simple exercise in hearing real people play real instruments. Combined with their high-energy performances, it's little wonder that the band has been converting listeners to their music over the course of three albums.

Speaking of albums, the band have posted a full stream of Eureka on the music page of their website at MotherMotherSite.com. Check it out in advance of their appearance at the London Music Hall on April 13 in support of Eureka. The show is all ages, and tickets are $25.