Nothing terrible about these Enfants 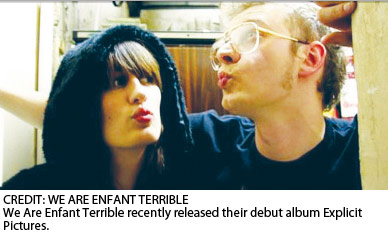 
You know how you can hear a song and like it instantly? There's a science to it, no doubt, but simply put, the music breaks down a certain barrier in your mind, that wall around your musical tastes and preferences and gets to the heart of you, makes you sing, dance or jump.

Many songs will make you bounce quicker than others, because they get inside you quicker. Others can take a while; it can be difficult to be a reviewer at times, because music is not unlike any other art form, deserving of attention and experience. You should let a record sink in to you, instead of looking for a connection.

Marrying a form of European synth-pop with samples from 8-bit video games, We Are Enfant Terrible create a sound that goes beyond traditional genres of chiptune or dub music to create something interesting and unusual.

But it's that marriage of sounds that makes the record such an experience to listen to, because if you've played many video games, there's an air of nostalgia to the music, the phantom of a memory that doesn't exist, the ghost of a video game that never existed.

Explicit Pictures is unique here in Canada by 2011 standards, and will most definitely draw some attention to itself in coming weeks. It's next to impossible to listen to it while remaining still in your seat; from the opening seconds of Make You Laugh, the music compels you to move.

The synth-pop factor is sharp, tight cymbal and hat work moving your shoulders with the beat, while the chiptune groove goes to work on your hips, a musical puppeteer that intends to watch you dance. Floret's vocals are especially sexy on Filthy Love, the first single from the record. It continues with Lobster Quadrille, the first proverbial boss fight you encounter on your journey.

The record continues on its textured path to Flesh 'n' Blood Kids, a dance track so good that I imagine Jamiroquai dancing to it. Like so many other songs on the album, it will make you want to forget everything you've got going on and dance.

Top five songs: Flesh 'n' Blood Kids, So Fine, Lobster Quadrille, A Song To You, Because Of The Bees

Twenty per cent that I would cut (two songs): Shangaď, Wild Child

For more information on We Are Enfant Terrible, or their debut record Explicit Pictures available in stores and online, visit WeAreEnfantTerrible.com or follow them on Twitter @waet. The band is embarking on a European tour this week, but you can look to them to return to Canada, likely sooner than later.