London is Shore in for a good time 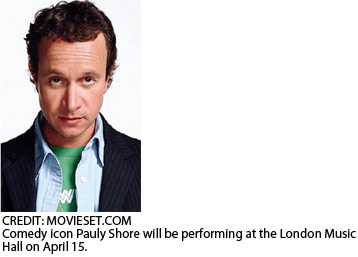 
Pauly Shore is an iconic figure from the '90s, and anyone who has seen his films has been left with an endless list of funny one-liners. On April 15 he is coming to the London Music Hall, and I must admit, I'm counting down the days.

I have very fond memories from my childhood of watching Pauly Shore movies with my big brother, you know, Encino Man, Bio-Dome and Son-In-Law. With his upcoming show in London, I had the extremely exciting opportunity to speak with him, and here's what he had to say.

What can people expect from your stand-up?
Well, it's Pauly Shore, so I guess you can expect Pauly Shore, if you even know who that guy is. You're not gonna expect something other than that. Outrageousness, fun, over the top, spontaneous, a little raunchy, a little dirty, having a good time; kinda stripped-down Pauly. It's definitely a sense of the Weasel, you know, the old stuff, but it's not really that anymore, even though that's kinda who I was for a while. But it's just fun, spontaneous.

Do you tend to tailor your shows depending on where you're going, or do you just do what you do no matter where you are?
Both, I think it's a good question. You wanna definitely adapt to where you're surroundings are, but funny is funny, you know? You can use the same material in Canada, America, Australia, South Africa; you just sometimes have to fuck with the references. But at the end of day, as long as you're relating to the audience, I think they'll understand.

If you had to pick, would you pick stand-up or making movies?
Probably stand-up.

In terms of your movies, what's more fun for you, acting in the movies, or writing, directing, producing and starring in them?
Well, when you're writing and doing everything it's a lot more work so the payoff is a lot bigger and the financial upside isn't that great, because the one thing they give you is creative freedom, but they don't give you a financial — it's not that interesting financially. When you're just starring and you're showing up it's like, 'Here's this amount of money and here's this amount of time,' you know, 'Do your stuff and get the hell out of here,' but you don't have as much say. I like doing both. When I do my own stuff it's just a lot more work.

Where do you get the ideas for the movies that you write?
That's a good question. I think I'm inspired by what it is I'm feeling as opposed to going, 'Okay, now I have to da-da-da-da-da.' For instance, when I went to Africa to film Adopted it wasn't like I thought 'Oh, I'm gonna do Adopted, now I'm gonna go to Africa,' it was like, I'm going to Africa cause I had to perform down there, 'Shit, I should do a movie,' and then I started thinking about it.

I know you have a few new projects coming up; can you tell me a bit about those?
The Shorez is a concept I came up with one afternoon when I was on the treadmill and I was watching the E! channel. They're doing a show called Leave it to Lamas, which was a reality show about Lorenzo Lamas where he's with his family, and I just think how ridiculous it is that people who are kind of icons get their own shows about their families, like the Osbornes and Gene Simmons. I thought, wouldn't it be funny if I had a fake family, exactly like these shows, but I don't have a girlfriend or kids or any of that shit. It's like Borat but for a reality show.

People probably come up to you all the time quoting Encino Man and Bio-Dome. I'm wondering if that's still fun for you.
It depends. It's almost like a UFC fighter. If I've been out on the road for a while, then after a while it gets the best of me and I get burned. Next week should be fine. I'll have gone back to L.A. where people don't come up to me and do that, they don't really approach me even though they know who I am, because it's kind of like an unwritten law out here: don't approach people who are on TV. It's kind of like my private time. Being in this business is like politics: you have to appease your audience because they're the ones who got you where they got you. It's like Barack Obama touring across America for two years; he probably didn't enjoy it, but he knew at the end of the day it's part of the job. There's a time and a place for everything, you've gotta flip it around on yourself and ask yourself would you want people coming up to you at certain times of the day and you've gotta say 'yes' and 'no.'

Do you have anything else you want to say about your tour?I love Canada. I just got off a tour over in Manitoba and it was great. People were really responsive and I'm very fortunate that people like me up there. It's pretty cool; I'm pretty lucky … I wouldn't say everyone does, but there's a lot of people that come out to see my show.

Tickets for the show are $25 and are available at ticketscene.ca or at the door. For more information about the show, visit londonmusichall.com or Pauly Shore's website, paulyshore.com.