Hey people! I've found some cool sites this week that I've just have to testify about! Let's get right to it!

TV Shows on DVD — www.tvshowsondvd.com — I found this link on one of the toy sites I usually go to. If you're a DVD junkie and are wondering when your favourite show is going to be released on DVD, look no further.

This site has excellent reviews on the DVDs, including picture, sound, extras, and informative little write-ups. The site has an archive for older reviews and a really cool release schedule to show you when your fave shows will be available to pick up.

When I searched through the site, I was surprised to see a few shows that I haven't seen in ages now available on DVD. I mean, Saved By The Bell Season 1 and 2? I can watch Zack and the gang take over Bayside whenever I want? Count me in!
Speaking of Saved By the Bell… 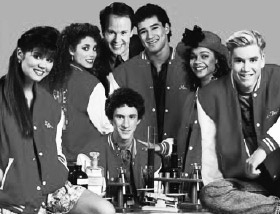 Which Saved By The Bell Character Are You? - http://home.mn.rr.com/couplandesque/quizzes/sbtb.htm - Yes, someone actually made this online questionnaire so you could find out which of the classic team you are most like. Just so you know, I took the quiz and I'm most like Kelly Kapowski: “I'm a bit of an airhead, but I'm pretty and popular, so no one really cares!”

Note: The Interrobang editor most closely resembles Jessie Spano: “I'm smart and I care for the environment. I don't let those sexist pigs called ‘boys' get in my way.

The Saved By the Bell Website -http://homepage.mac.com/ijball/SbtB/Home.html — For those of you who just can't get enough, this site has amazing news, links and facts about the show from the early classics all the way to SBTB: the College Years episodes. There's even a section for those fictional reality shows that were on NBC that were spun from the success of Saved By the Bell.

Saved By Your Balls - http://newgrounds.com/portal/view/187916 - Ok…one more for this TV show and it's a nasty one! For this web game, you choose to be one of the Saved By the Bell characters and try to raise $5000. The catch is that this isn't the regular Bayside we all know and love…it's a school filled with sexual overtones! All I can say is watch out for Slater in the locker room! People who are easily offended need not go here.

Which Saved by the Bell cast member is most like you? Email Peter at popeyepopsolive@hotmail.com