Team Canada's Petey Williams, Eric Young, and A-1 vs. Lance Hoyt, Kenny King, and Jay Lethal in six-man tag team action
Although the majority of these guys are unfamiliar to me, they made me a firm believer that TNA holds some strong performers that need to be seen. In the end, Petey Williams picked up the win for Team Canada.

Homicide and Konnan vs. The Naturals in tag team action
I've never been a fan of Konnan and this match wasn't too exciting for me. The action was there, but I loathe Konnan so much that I really didn't pay too much attention. It was a snack break moment. Homicide and Konnan did pick up the win. 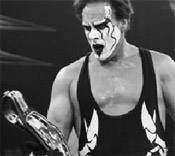 Alex Shelley, Austin Aries, and Roderick Strong vs. Chris Sabin, Sonjay Dutt, and Matt Bentley
Another match with many faces I was unfamiliar with. This match was even better than the very first match with some excellent and exciting spots. Alex Shelley picks up the win for his team with a handful of tights.


“The James Gang” Kip and B.G. James vs. David Young and Elix Skipper w/ Simon Diamond
What's old is new again in TNA. The James Gang is actually the New Age Outlaws! BG James is the Road Dog Jesse James and Kip James is Bad Ass Billy Gun. Confused yet? It's all good. The boys looked to be just as good as they were in the WWE and Young and Skipper put on an excellent match with the veterans. The James Gang came out on top during this match.

“The Phenomenal” A.J. Styles vs. New Japan's Tanahashi
This match is probably my pick for match of the night. The TNA fans are very vocal and were split with their chants. At least TNA doesn't turn down the crowd volume when the chants are mixed. I hope that Tanahashi gets signed by someone on our side of the world because that boy can wrestle. AJ Styles picked up the win but I encourage all you wrestling fans to get this when it's out on DVD just to see this match.

Raven vs. Sean Waltman
Ahh, Sean Waltman. You got fat, man! For those of you who don't know who Sean Waltman is, you may know him better as X-Pac, Syxx or the 1-2-3 Kid. Ring a bell yet? Waltman was brought in as a mystery opponent to face Raven. The stipulation was that if the mystery man beat Raven, Raven wouldn't work in TNA again. So, what makes for a good story line? Raven losing, that's what. I can't wait to see where this goes.

Bobby Roode w/ Scott D'Amore vs. Ron “The Truth” Killings
Anyone else remember The Truth when he was known as K-Kwik in the WWE? He had talent then and he has even more now. This match was held to settle a score from Impact last week where The Truth beat Roode three times in about six minutes. Roode got the last laugh when Konnan shows up and costs The Truth the win.

“The Monster” Abyss vs. “The Man-Beast” Rhino
Awesome match! There were some pretty intense spots where each competitor got to show off their brute strength. I can't believe that Abyss picked up the win considering Rhino was the champ only two months ago. Hopefully we'll see round two.

Team 3D vs. America's Most Wanted
This match was pretty damn good, too. In the end, Team 3D won but lost. How? Well, the ref got powder in his eyes but made the three count when Ray was making the cover for the win. The rest of Team Canada came in, beat up Team 3D and Harris was dragged on top of Bubba. When the ref finally got all the powder out of his eyes, he saw Harris getting the pin and thought that he counted the three in favour of AMW. Good ending, good writing and very unexpected.

Christopher Daniels vs. Samoa Joe (*) for the X-Division Championship
People like this Chris Daniels guy, but I'm a mark for this Samoa Joe character. He's brutal, he's ruthless and he's got a crazy look in his eyes. When you look at Daniels, you think, what's this skinny guy doing in wrestling let alone facing Samoa Joe. Well, Joe beat the crap out of Daniels most of the match and ended up busting him up wide open. Joe picks up the win and continued his assault after the bell rang.

Jeff Jarrett and Monty Brown vs. Christian Cage and Sting

It's nice to see Christian getting ring time again. This match, which featured the in-ring return of Sting, was full of excitement. Sting looked pretty good for not wrestling in a few years. The crowd ate up every move Sting made and it's no surprise that he and Christian picked up the win. That Monty Brown guy is also someone that we should be keeping our eyes on this year.

Phenomenal matches and athletes! This PPV was well worth the $30. If TNA gets prime time during the week, they'll really give the WWE a run for our money in 2006.

I think that just about covers the wrestling world for this week. Stay tuned for next week's report on TNA, over-the-hill wrestlers and the latest too-easy-to-call matchups.