“Aerosmith rocks,” Amanda Petit said as she sat first in line at Fanshawe's biz booth on Monday morning when tickets to the March 21 concert went on sale.

Petit, who was waiting since 7:30am for tickets, and about 50 other avid Aerosmith fans all vied for the 34 tickets the Biz Booth had on reserve.

Director of Marketing at the JLC, Dave Harris, said the 9,000 total Aerosmith tickets sold out in minutes.

With Aerosmith's four-decade long history of putting on energy-packed shows and the John Labatt Centre's new ranking as one of the top entertainment facilities in the world, the concert is practically guaranteed to be excellent. 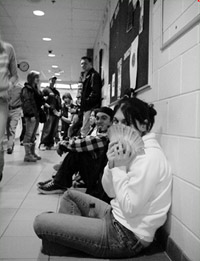 Two key publications in the entertainment industry, Pollstar and VenuesToday, recently named the JLC among the top concert-going facilities for 2005.

Harris attributed the venue's success to the fans in London and Southwestern Ontario.

“Without the fans we wouldn't be able to reach our goals,” Harris said.

VenuesToday, which listed the venues based on 10,001-15,000 seating capacity and ticket sales, named the JLC as the second best, behind Atlantic City Boardwalk Hall in New Jersey.

According to VenuesToday statistics, almost 400,000 people attended 77 shows at the JLC in 2005. The three-year old facility also grossed over $14 million (US) last year in concert ticket sales alone.

Based on ticket sales regardless of size, Pollstar Magazine ranked the JLC 34 among the top 100 venues in the world.

Montreal's Bell Centre, the Air Canada Centre, MTS in Winnipeg and Calgary's Pengrowth Saddledome outsold the JLC in ticket sales and therefore ranked above the Forest City venue in terms of Canadian facilities.

At the top of the Pollstar list was New York's Madison Square Gardens, which sold over 1.2 million tickets in 2005. The JLC sold a respective 247,000 concert tickets.

Harris said both publications did not include ticket sales for hockey games in their tally. With the Knights winning season and London hosting the Memorial Cup, hockey was obviously big in 2005 for the JLC.

In addition to the worldwide recognition, the JLC is one of seven venues nominated for the Canadian Major Facility of the Year, which will be announced a month from now.

“We are very pleased to have attained this nomination based on a diverse range of concerts including Green Day, Sarah McLachlan, Black Eyed Peas, Pearl Jam and the Barenaked Ladies,” said General Manager of the JLC, Brian Ohl.

“We are extremely honoured to be named as a finalist for the top facility in Canada for the second year in a row.”

Aerosmith's “Rockin' the Joint” tour, which currently lists 59 dates throughout North America, promotes their latest album that was recorded live at the Hard Rock Hotel in Las Vegas.

“Aerosmith is what we like to call a benchmark act,” said Harris. “We can now list them along with Metallica, Green Day…. They are universally known bands.”

Frontman Steven Tyler and his four band-mates were inducted into the Rock & Roll Music Hall of Fame in 1991 and Aerosmith also has a star on the Walk of Fame in Hollywood. The band has released 25 albums (13 multi-platinum, five platinum and four gold) and has won four Grammy Awards.


Although Aerosmith is one of the biggest names to roll into the JLC, Nine Inch Nails are also playing on March 6, and Rob Thomas will be on stage on March 16.

For country music fans the JLC will have Brad Paisley performing on March 14 and the legendary Willie Nelson will be in town on April 17.

Other than the JLC box office, website and ticket-line (1-866-455-2849), Fanshawe became one of the exclusive vendors of JLC tickets for hockey games and concerts in September 2005.

In the past five months the Biz Booth has sold tickets to Simple Plan, Hilary Duff and Blue Rodeo.