Zero tolerance for weekend B&E and bottle-throwing, thanks to London's Project Speakeasy II


After responding to several noise and disturbance calls related to an out-of-control Second Street bash over the weekend, two police officers were forced to dodge projectile beer bottles thrown by unruly partiers.

The Project Speakeasy II officers, a division of London Police Services, were not seriously injured by the hurled bottles at the Friday night party, but were forced to leave the scene and return later with about 10 more officers to control the situation. 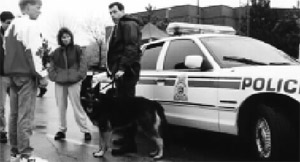 “It's one thing to have fun, it's another to be throwing beer bottles,” said Glen Matthews, Housing Mediation Officer for both Fanshawe and Western. He said Fanshawe could not condone the criminal actions and those students involved should be held accountable.
“Students must get the message that this is unacceptable.”

In anticipation of back to school parties, Fanshawe's Counseling and Student Life Services sent out an information package to all residences both directly north and south of the campus on Labour Day. The package highlighted common by-law offences as well as responsibilities students acquire when moving into a residential area.

The college is currently working with Police on the problematic areas in hopes to create a solution, Matthews said.

Officers had to return to 900 Second Street on Saturday night when four males were arrested for breaking and entering. According to Matthews, the Second Street residence units house over 350 Fanshawe students and the landlord is being co-operative in the efforts to control disturbances.


Police also saw some action on Thursday, September 8, when a Waterloo Street keg party was shut down. Seven residents of the host house were charged and two kegs with suspected proceeds were collected as evidence pertaining to selling liquor without a license.

The first week of school was a busy one, with Project Speakeasy officers arresting 16 and charging 127 people with criminal and provincial offenses. There were also 23 by-law charges laid.

A zero tolerance policy is in effect for all criminal and provincial offenses, noisy parties and by-law offences.


Project Speakeasy is a law enforcement campaign targeting the over-abundance of party-going students coming back to school both at Fanshawe and Western. According to Pfeffer, residents and business owners near the college, university, as well in the downtown core, approached police with complaints about rowdy back to school students.

The project aims to prevent, or at least curb the increased amount of student offenses during September.