Like two bickering children who turn to their mother to mediate a fight, college management and faculty have recruited an arbitrator to get province wide post-secondary education back on track.

After an 18-day faculty walkout, three of which were spent at the negotiation table, the two sides could not agree on a suitable compromise over class size, workload and salary. As a result, a third party will impose mediation arbitration. 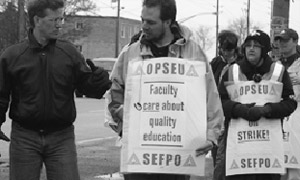 Led by William Kaplan, the arbitration process will consider both parties' positions and settle with either one side or the other, or possibly somewhere in-between, which according to Fanshawe's president, Howard Rundle, could take up to two months.

Faculty has been working without a contract since August 2005, and the two sides have been negotiating back and forth over the past 14 months.

How is it possible that students spent three weeks out of class when faulty and management had 14 months to negotiate a fair and compromising contract?

“We were told the union did not substantially change their position,” Rundle said about the other side of the table. “The college's offer was fair and reasonable.”

During final negotiations the college offered a 12.6 per cent salary increase over four years, 120 new full-time faculty hires, no increase to workload and a 25 per cent increase in time for faculty to provide out-of-class assistance to students.

Meanwhile, president of the Fanshawe College faculty union, Paddy Musson, said a negotiation could not be reached because the colleges were not investing their new government funds on improving the quality of education.

“There should have never been a strike,” Musson said. “We simply cannot see a continuation of quality if the number of students per teacher gets larger and larger.”

The union would like to see the average class size drop from 29 to 25 and Musson agreed, reiterating that Ontario's colleges are about hands-on learning.

“One thing we know about learning is if students are doing, their retention rate increases,” explained Musson. “I'm proud that teachers took a stand and brought out these issues.”

As of the last set of negotiations, faculty has said management's offer reduces quality by putting money in the wrong place. Musson said the hiring 120 new teachers across the province wouldn't even cover those retiring.

Although the three-week strike was relatively peaceful at Fanshawe, the same cannot be said about the picket line at Centennial College in Scarborough, where 62-year old Centennial accounting teacher and picketer, John Stammers, fell off the hood of a driver's car and died five days later in Toronto's Sunnybrook hospital.

Police cleared the driver of the vehicle of any wrongdoing and will not be charging him.