“It was a thrill to work for the college,” said former Fanshawe graduate and architect Steve Done of Tillman Ruth Mocellin Inc, upon accepting the award during a city council meeting. “They truly had the students in mind.”

"The purpose of the awards is to recognize and honour the work of local architects and promote excellence in urban design in our city," said Rob Panzer, General Manager of Planning and Development for the City of London. 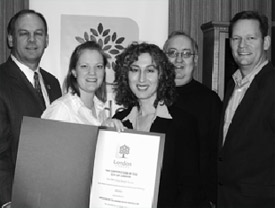 “The design captures the enthusiasm of youth and the enthusiasm for learning,” said London Mayor Anne Marie DeCicco, who is also a Fanshawe College alumnus.

London's Urban Design awards are chosen by a committee of design professional from the London area.

The Student Centre, which is owned and operated by the Fanshawe Student Union, opened its doors to the expanding student population in September 2004. The building cost $7.5 million to construct and replaces the Student Union Building (SUB) as the main centre for activity. Students voted in favour of the building's inception with a referendum, as the building is paid entirely from student fees.

John b. Young, FSU operations manager, said from concept to finality the project only took four years to complete. An amazing feat, considering other student centres in Ontario have taken decades to finish.

The Student Centre was chosen over University of Western Ontario's North Campus Building, the Berkshire Pumping Station and the Number Two Fire Station on Florence Avenue in the category of New Retail/Commercial/Industrial/ Institutional building.