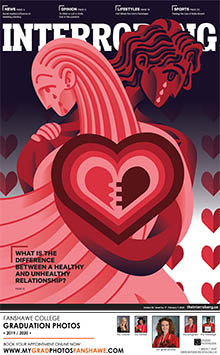 
The Canadian Juno Awards may seem like second string to the spectacle that is the Grammy Awards, but Canada, and Fanshawe College, have a lot to be boast about nationally and internationally.

There has even been a Juno award renamed for a current Fanshawe teacher.

Best known for his producing work for The Guess Who, Richardson actually took a second mortgage out on his house to cut the bands first record, Wheatfield Soul, in 1968. By 1970 The Guess Who was one best selling rock groups in the world thanks to Richardson.

He went on to produce some of the biggest selling records of the 1970's, like Alice Cooper's School's Out and Bob Seger's Night Moves album. Richardson has also worked with Peter Gabriel, Pink Floyd, Bay City Rollers and Poco.

Despite Richardson's success he never migrated south to more musically bustling American cities, instead he choose to stay in Canada to raise his family. In 1975 he accepted a position as Chair of the new MIA Advisory Board at Fanshawe, and started teaching in 1984.

MIA recently celebrated its 30th anniversary and Richardson has been on board almost since its inception.

This year Richardson's son Garth (Gggarth), who has worked with the Red Hot Chili Peppers, Rage Against the Machine and System of a Down, has been nominated for the same award that was named after his father.

With three wins and seven nominations under his belt for Recording Engineer of the Year, fellow MIA teacher Kevin Doyle is no stranger to the annual music ceremony. After gradating from the MIA program, Doyle went on to work with a diverse range of artists that include KISS, Alannah Myles, Hall and Oates and Yo Yo Ma. He even worked on the score for the controversial film Passion of the Christ.

Doyle returned to teach at Fanshawe in September 2004.

Some are upset that international nominees, Coldplay and Black Eyed Peas, are garnering attention to the uniquely Canadian celebration of music, but with home grown acts like Michael Buble, Diana Krall, Nickelback, Simple Plan, K-OS and Barenaked Ladies up for awards, it's hard to deny Canadian talent.

And if that isn't enough to get you tuned in, remember that the Canadian Baywatch beauty, Pamela Anderson, will be hosting the ceremony.