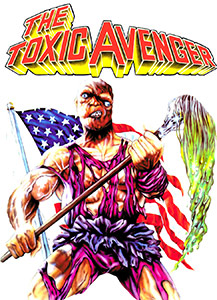 It is Environmental Awareness Week on campus, the time when we turn the spotlight on Mother Nature. Sadly, an alarming percentage of the population would rather simply drop their coffee cups and candy bar wrappers on the ground than walk a block further to dump them in a garbage can. However, more and more people are getting the message.

Twenty years ago, the only time you ever saw a blue box was when someone drew some inappropriate sketches of Smurfette. Now it seems everyone is using them to recycle. Hollywood bigwigs are spreading the word as well. Films such as 2012, The Day After Tomorrow and The Lone Ranger show just how easy it is for a disaster to occur. There is only one film, however, that can truly claim to be a frontrunner when it comes to broadcasting the message of environmental responsibility out to the masses.Way back in 1984, The Toxic Avenger burst onto the scene and cleaned up at the box office.

The Toxic Avenger tells the tale of a man named Melvin, who by name alone you can tell is a nerd. Apologies to anyone who has that name, but you never hear about Mila Kunis or Katy Perry making a sex tape with some dude named Melvin. Poor Melvin is bullied to no end by the members of the Tromaville Health Club, where he works as a janitor. At one point they even force him to wear a pink tutu and make out with a sheep. Things go from baa-d to worse when Melvin falls into a vat of toxic chemicals as he tries to escape from the bullies.

Motion pictures have taught me that when people fall into a barrel of toxic materials, they generally turn into superheroes or supervillains. In some rare cases, they die. But usually it is one of the other two options. In this case, Melvin goes from zero to hero. Hideously scarred, Melvin cannot return home, and instead sets up residence at a junkyard. After a period of feeling sorry for himself, he decides to once again pick up his janitor's mop, and clean up the city's crime. And boy, does this city have a lot of that.

Nasty characters with monikers such as Cigar Face, Knuckles and Nipples terrorize the residents of Tromaville, running over children in the street like it was a sport. Melvin, or the Toxic Avenger as he soon becomes known, takes out the trash in a ridiculously violent manner. Spiderman, Superman, Batman and their ilk would not have the stomach to perform some of the deeds that The Toxic Avenger does in the name of justice. Like crushing a drug dealer's face with a weight-lifting machine. Like ramming a milkshake stirrer into another two-bit con's throat. And last, but not least, ripping out the intestines of the town's crooked mayor. The scene alone would be enough to steer even the shadiest politicians to walk the line.

I know what you are thinking. “This sounds like a very gruesome film, maybe it should be turned into a children's television show.” Well, by golly, somebody already had that idea! In 1990, Toxic Crusaders hit the airwaves, delighting youngsters, and hopefully leading to their discovery of the film. A Nintendo Entertainment System game based on the characters was developed, and a live musical was also produced. Plus there were three sequels. The characters who inhabit Tromaville will get their biggest spotlight in a few years when a remake is released, starring none other than Arnold Schwarzenegger. I'm all for this film being recycled.

The Toxic Avenger is a brilliant film that not only entertains, but it truly makes you think. Topics such as bullying, political corruption and our impact on the environment are handled in such a classy way, especially the scene where the Toxic Avenger kills an elderly female dwarf by throwing her into a washing machine. It's okay, she was a slave trader. My feelings about this film can be summarized by these lyrics from the great Britney Spears: “You're toxic I'm slipping under/With a taste of a poison paradise/I'm addicted to you.”
Movies Movie reviews

Reel Views: Vin Diesel shows off his skills in Riddick