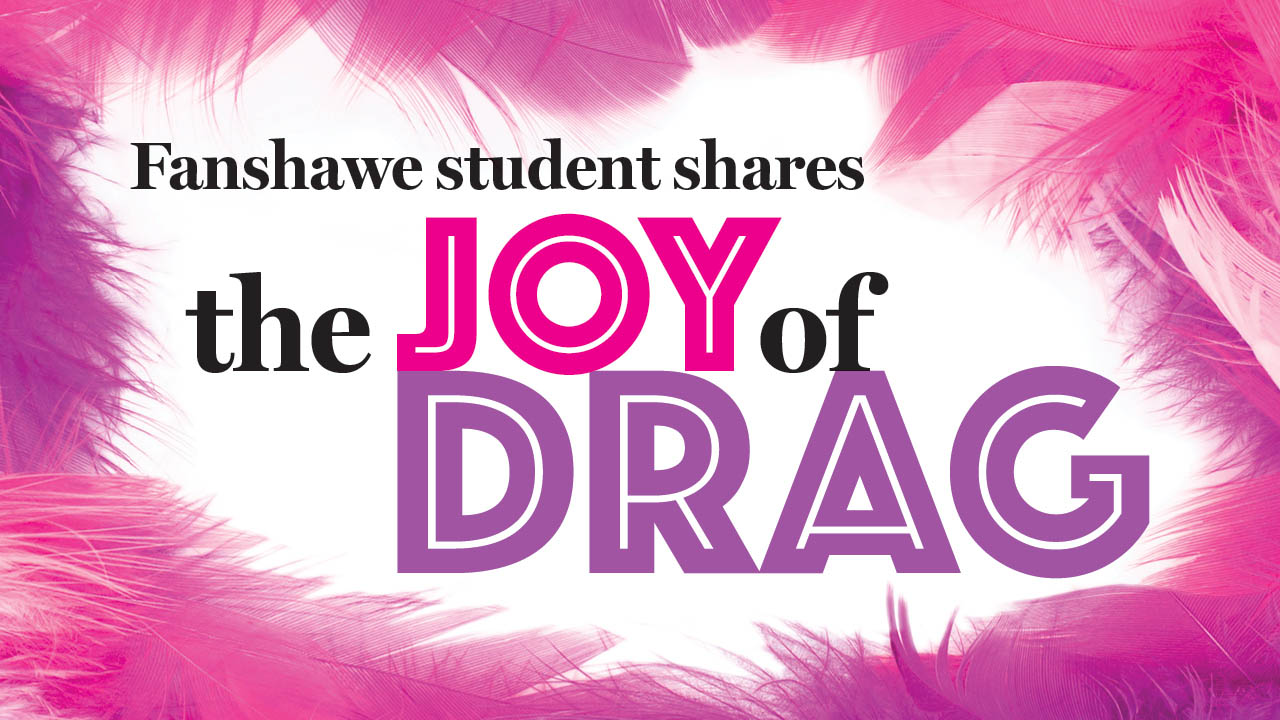 “Drag” is a well-known term wherein a person dons attire of the opposite gender and usually performs. In 2022, it is now common to hear this term being used, especially when here in London there are many drag shows. Shows like RuPaul’s Drag Race have also helped bring drag into the mainstream.

A Fanshawe TV and Film Broadcast Production student, Ethan Justus, is a well-known drag queen, who you might know better as Scarlet Wonders. Justus has performed many times in London at local bar Lavish, located on Dundas St. Justus has been doing drag since 2019 and has built his reputation up as Scarlet over many years.

“My favourite part about being a drag queen is just being with people who have similar life experiences as me, and just being involved with my own community,” Justus said. “Growing up in a small town really limited my exposure to queer culture. When I started drag and met new people, I finally got to meet people that are just like me. Another thing I love is the laughs! We always joke around with each other and ‘read’ each other. I love to laugh and I never laugh more than when I am with my fellow drag performers.”

There is so much that goes into being a drag performer and a lot of time goes into transforming into a look. Justus explained that it still takes him a couple hours to get into drag, even though he has been doing it for years now.

Drag is much more than the “look,” though. It is about putting yourself into a different person and acting a different way than you would on a day-to-day basis. Justus explained how drag is a way of expressing yourself through art.

“It allows people to show a side of themselves that would never come out in day-to-day life. It shows people that dressing up and having a good time is not something that should be frowned upon. It lets people be creative and just have some fucking fun! If people are uncomfortable by it, good. I hope they get used to it because we are not going anywhere.”

As the world becomes more evolved with people and their way of expressing themselves, places like London become more of a safe place to explore all kinds of drag.

“Drag is so diverse,” Justus said. “There are queens, kings, nonbinary, gender non-conforming, etc. Performers all over London. Many people think that the drag queens are the only ones but that is far from the truth. Some of the best performers that I have met are drag kings. If you want to explore more involving drag, just do a simple internet search. You will find that anyone can participate in drag and go under a name or identity that fits them.”

Justus said it can be a bit of challenge to do drag while being a full-time college student.

“It affects my life in both positive and negative ways. I am able to express myself in ways that I never knew I could. It can affect my day job and school. Sometimes I have missed classes to prepare for a show and I often have to book days off from my day job just to make it to shows. When I have to miss class for shows, I find it challenging to catch up. Planning my performances, outfits, and makeup can be quite time consuming. Sometimes I forget about assignments or school functions that I signed up for because of this drag planning.”

A major part of drag is the lip sync, something Justus does at his own shows. But Justus said he wants to do more than just lip sync, creating core memories with friends and audiences that make people feel good.

“When I tried a new type of costume, I got so many compliments that I almost cried. I also styled a new wig and debuted it with the new costume. I never felt so much love from my fellow performers and also the audience. I also did a song tribute to a close friend that night. It was such a full circle night for me. I will never forget it.”

Drag teaches us that it is OK to be different, to find new ways to express yourself, and to share that with the community. The world is changing and has a lot of room for bright, wonderful and talented people. So if you’re interested in exploring drag, Justus said, “go for it!”

“It is such a fun way to pass time and you get to meet so many people, and also travel! I have performed in Sarnia, London, Chatham, and now trying to make my way into Toronto. It is such a great way to express yourself and discover things about yourself that you never previously knew. As RuPaul says, drag doesn’t make who you are, it actually reveals who you are,” said Justus.
Drag Fanshawe students

Emma is a journalist of three years, and is currently enrolled in TV & Film Broadcast Production at Fanshawe. She is currently a reporter for Interrobang.

Explaining how YouTubers make their money