A small town boy built for anything 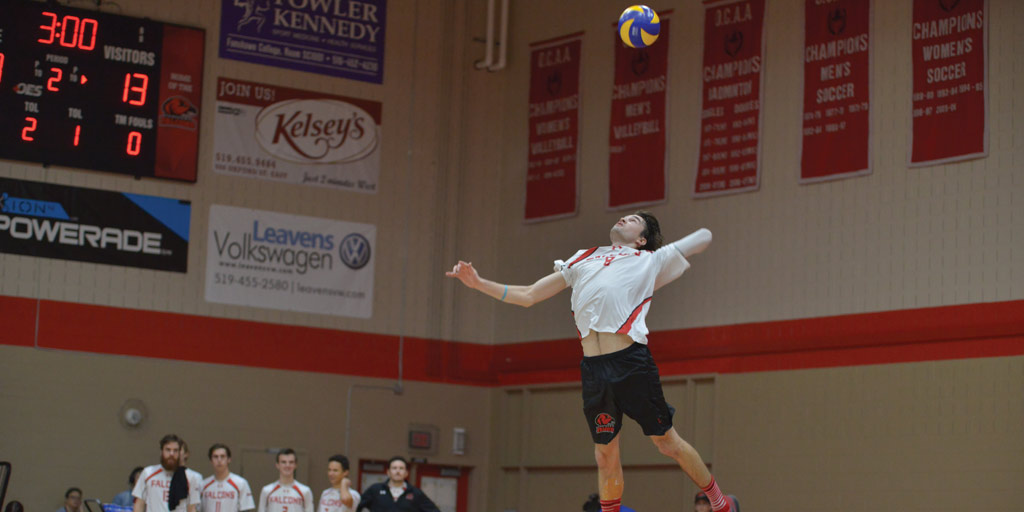 Nate Van Camp has made a name for himself on Fanshawe's men's volleyball team as one of Fanshawe's scoring leaders.


Nate Van Camp has made a name for himself on Fanshawe’s men’s volleyball team. As a six foot four fourth year it is not hard to understand how he has climbed his way up to being one of the Falcon’s scoring leaders.

To truly understand what led Van Camp to be such an extraordinary athlete, Interrobang sat down with him and the head coach of the team Patrick Johnston to understand where he was from and his athletic background.

According to Van Camp and Johnston, the fact that he is from the small town of Blackstock, Ont. helped him become the athlete he is today.

“Being from a small town gives him an extra bit of grit and determination that we need for the team. I typically see that from guys from smaller towns,” Johnston said. “They usually have a lot of friends and family support back home.”

According to Johnston, players such as Van Camp are a true pleasure to coach.

“Players like Nate naturally exceed expectations and help motivate the team,” Johnston said. “He’s definitely an emotional leader and one of our go-to attackers.”

Van Camp, being a well-rounded athlete, excels both offensively and defensively; the skills that he shows both on the court and in the gym allow for him to be one of the leaders of the team.

“I would look at myself as a ‘do as I do’ kind of leader so that the newer players can follow suit and achieve their best,” Van Camp said.

According to Van Camp, both learning how to be a strong leader and a strong athlete began early on in his athletic career when he played competitive hockey.

“Hockey and volleyball are both strategic games. You have to think quickly and think about the move before the opponent realizes what you are doing,” he said. “Playing hockey first helped me develop some of the mental skills needed to be a good volleyball player.”

But on top of having the mental game up to par, athletes at a varsity level also need to understand how to eat well in order to be able to perform.

“We chat about nutrition at the start of the year and our sports psychologist knows a fair bit about being a high performance athlete,” Johnston said. “For the most part, they are left to their own, but on game days whether it be on the road or at home we eat together.”

According to Van Camp, he agrees a healthy diet is extremely important to being a successful athlete, but at times it can get rather difficult.

“We try to eat healthy but on the college budget it’s challenging.”

With the National Volleyball Championship in the horizon and Fanshawe getting an automatic entry into the tournament, it puts a whole new level of pressure onto the coaches and players.

“Getting the players in the headspace that we still need to fight will be the biggest challenge,” Johnston said. “Normally we would fight for a spot in nationals, but since we already have a spot we have to adjust our mental state and make sure everyone is ready going forward.”

According to Johnston, the team is “very good at home”, but hosting the event will add a significant amount of pressure.