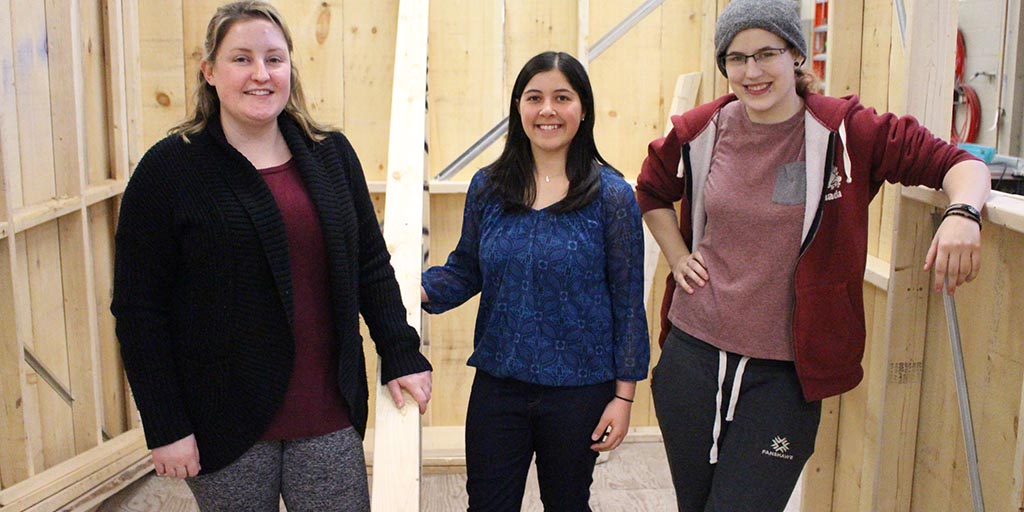 
In an effort to gain more females interest in the world of carpentry, Fanshawe introduced a pilot project of a women-oriented learning experience.

According to the program’s description, Women in Carpentry, is designed to provide a hands on learning experience for women interested in construction, while in a female friendly and supportive environment. It allows females to not only learn and excel in the world of trades, but to let them feel comfortable and supported while in Fanshawe’s residential construction and renovations programs.

The initiative, which began last September, will continue on next year due to the positive feedback from stakeholders, Steve Gedies, professor of construction carpentry techniques said.

The program is offered either as a one or two year program.

According to Gedies, the initiative was a response to the low number of women who were applying to the department.

“Our goal was to have women feel invited, feel comfortable in learning this type of field, in the construction sector. So our idea is to create a window of opportunity, three courses out of the potential 24 courses, (if they are doing the two year program), where it would be in an area that would be female friendly, it would be a curriculum designed and administered towards women because we believe that they learn differently from past experience and research,” Gedies said.

Gedies said that the project is to also help relieve real and perceived barriers that exist in the field, as well as build the skills and confidence needed for the industry.

Gedies hopes that this will help so when everyone is working together, the respect and integrity is earned since the skills set is already present and strong.

According to Gedies, bursaries and mentoring opportunities for those taking part in the initiative from the stakeholders as well.

Jessica Bell, a first year student who is part of the project said she thinks the initiative is a good way to encourage the number of women enrolling in the program, since roughly 10 women initially signed up for the program, but only four showed up.

“I think whatever it takes to get numbers up and have people going after what they want to do, it helps,” Bell said.

Emily Chartrand, another student in the program enjoys her time at Fanshawe and is enthusiastic about the project.

“When I was in high school, I was surrounded by all guys and they would always make me feel like I couldn’t do anything the way they were, like I couldn’t hold a two by four because I wasn’t strong enough, but here I have so much more confidence and so much more fun,” Chartrand said.

Chartrand is confident in the skills she has gained so far in her courses, which she’s looking forward to putting to good use this summer.

Chrissy Dube, a third student of the quartet said she also enjoys the program since the group is able to attend workshops and events where they can meet with others in their field, and those who are already in the workforce.

The three women all agree that the initiate allows for a less pressured learning experience, with Chartrand stating it’s a warm environment where they can feel free to ask any questions they need.

According to Dube, it’s a much more open environment, since men typically don’t as many questions. “I think if the guys were here, I would start second guessing more though because it’s another set of eyes watching you,” Dube said. “We do our stuff differently.”

“Whenever we start something that is group oriented, we always sit down and plan everything out instead of kind of just jumping at it, so we’ll plan ahead and make sure we kind of have all the information we need before we go ahead and start swinging hammers,” Bell said.

All three women are happy they chose to take the program, and are learning so much in such a short period of time. They’ve worked on a number of projects already, and showed the Interrobang a shed they were working on.

One main focus both Gedies and the three women pointed out is that it’s not necessarily a “girl power” or a “girls are better than guys” initiative, but rather one that encourages women to go after their construction passions and to feel their best while working in the industry.

“It’s just we’re doing what we want to do,” Dube said.

Bell thinks that perhaps people shouldn’t focus so much on the gender aspect of the project since it raises flags for some people.

“It’s about being comfortable and coming to Fanshawe to learn, which is what’s important about it,” Bell said.

“The goals is that it’s seamless,” Gedies said. “It’s a simple concept. Let’s make this an inviting place for everybody and that’s what we’re doing. It’s a conscientious effort to do that, but it seems to be working well.”