Everything should know about condoms 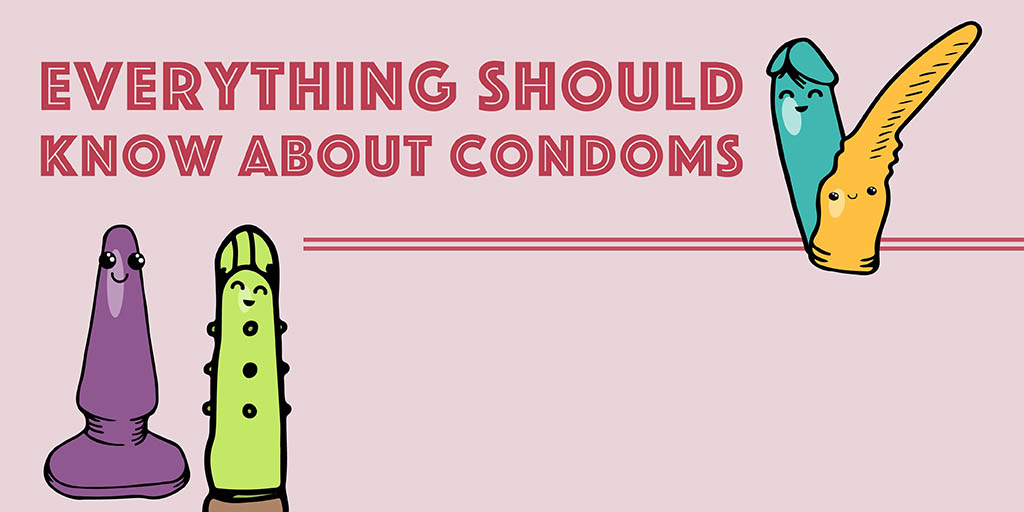 Condoms: how to use and why to use them

There are two types of condom, one for men and one for woman. The male condom is the most commonly known about and is sheathed on an erect penis by pinching the end and rolling it out down to the base of the penis. The lesser used female condom is slide into the vagina, similar to a tampon, left with the outer ring sticking out. Using condoms are fundamentally important as they are a top way of protection against pregnancy and are one way to protect against STDs/STIs and other diseases.

Fun fact: condoms have actually been around for decades. being previously made from animal intestines, it was Charles Goodyear’s rubber vulcanization process that led to the discovery of the first rubber condom in 1855.

What you should know when buying condoms

Size: It is important to make sure that the condom is the right size for both parties of the act. The condom should ideally be a snug fit on the penis. Make sure it is not too tight, making it having a higher chance at breaking, and not too big so that it slips off during sex.

Material: The most trustworthy material is the good old latex kind. But if you or your partner are allergic to latex there are options like polyurethane or even lambskin condoms. Warning though, the lambskin condoms do NOT protect against STDs, potentially only against pregnancies.

Lubrication: One of the most important aspects when choosing a condom is to make sure you have a smooth-sailing experience during intercourse. That means lots of lube. Some condoms are already lubricated on the outside or both in and outside.

Scent: Scent can be a real turnoff for some. The smell of some condoms are also revolting enough to activate the gag reflex, which can be a big downer on a blow job. If you want to avoid any problems, buy condoms that are scent free.

Taste: Can be used to spice up the nightly pleasures. The flavour usually is added in the lubricant, so make sure to be aware of any allergies to lube with your partner. Make sure to choose a good flavour to make for a better experience.

Mistakes to avoid: there are actually quite a bit of mistakes that many people may do by accident or without realizing they shouldn’t.

Here are some helpful tips by BuzzFeed that will help you keep safe when you get naughty:

Make sure to NOT use the same condom if you began putting it on the wrong way: Condoms have a way they roll out easily from, otherwise the condom won’t roll out. If this happens, always start fresh as pre-ejaculation could be on the condom, which would defeat the purpose of it protecting you and your partner from diseases or potential pregnancy.

Use a different condom for every act. This helps reduce the risk of STDs and other infections spreading to other parts of the body.

Keep it on the entire time

Only about 59 per cent of people using condoms keep it on the entire time, the rest take it off before they finish. For a condom to work it needs to be on from start to finish. This is the only way to prevent pregnancy and STDs.

There is no risk of pregnancy, but STDs can still be transmitted this way so it is better to be safe than sorry later on.

There are many brands for condoms, which makes choosing a lot harder and tricky to make sure buy one that you and your partner both enjoy.

Here is a comprehensive list of some brands that are ranked highly in what people find to be the deciding factors when using a condom:

Best Fit: My ONE Perfect Fit

When it comes to lubrication, this brand is said to be the way to go. Not only does it taste and smell good, it is also well known for its even distribution for lube.

Kimono MicroThin has been praised as being the ultra-thin condom that feels good to touch and keeps the sexual friction high in the bedroom.

This condom ranks highly online for both being easy on the nose and delightful for the tongue.

These brands are said be the most durable for sex and the least abrasive, making tearing less likely.
Condoms Health Sex Education Sexual Awareness

What does this sex toy do?