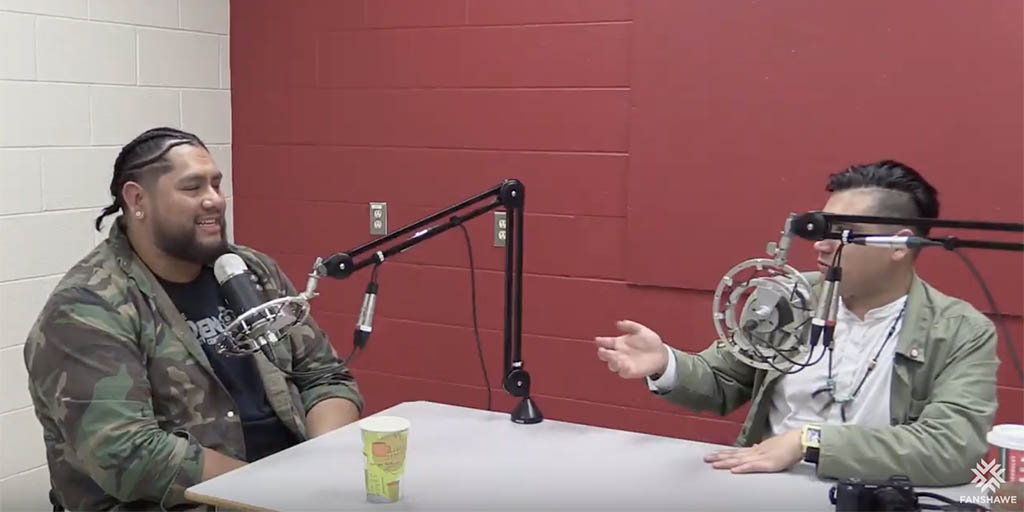 The pilot episode of the podcast was released on Jan.14.

The concept behind the podcast is to showcase successes of First Nations individuals in different occupations and ultimately show Indigenous students at Fanshawe that there is great potential for them in various areas of life.

The First Nations Centre provides academic services and support, as well as social, cultural, and recreational events and activities for Indigenous students at Fanshawe. The centre has grown from 74 registered students to close to 1,000 over the course of two decades.

The podcast is another means of connecting with students.

The pilot episode featured Colin Van Loon, a filmmaker and actor who has had much growth and success in the industry, including working on the film The Revenant (2015) with director Alejandro González Iñárritu.

Kennedy pointed to media and the portrayal of First Nations Peoples as a major barrier.

“The media is this chaos of who you are supposed to be as an Indigenous person,” Kennedy said. “It’s about creating the new stereotype. There’s successful [Indigenous] people from broad areas of occupations, but the goal is to show all the positive things they are achieving.”

The purpose of the podcast is also to get conversations started about Indigenous stories. According to Kennedy, education is the key.

“Dialogue is the biggest bridge between perspectives,” Kennedy said.

He added that the type of guests to be featured on the podcast will be varied.

“Could be guests, or students, or faculty, or different people in the college to come in, sit down, and have a conversation,” Kennedy said.

Although the project is a podcast, videography is used so the episodes can have a visual feature as well.

As of now, the first episode of the Podcast is available on YouTube.

In the future, the plan is to release a weekly episode on YouTube and other platforms as well such as the Podcast App. “We released the first [episode] ‘as is’ for the pilot, with some more cued up too,” Kennedy said.