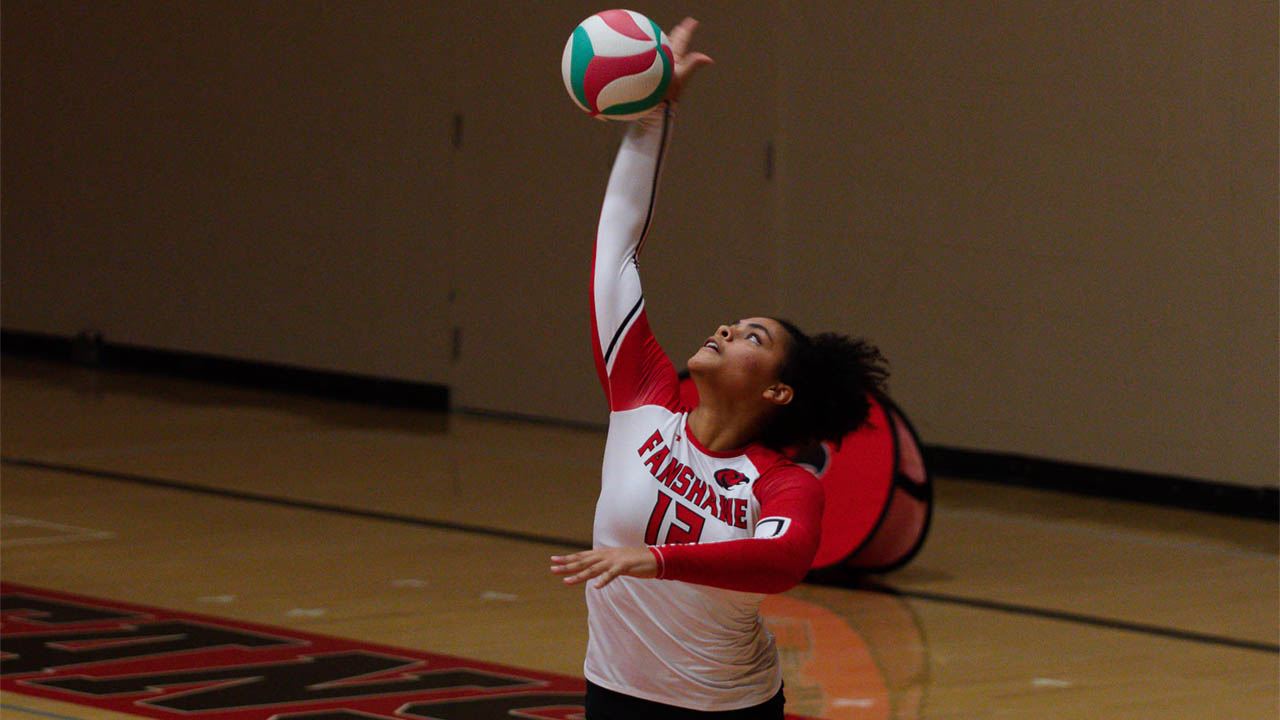 CREDIT: FANSHAWE ATHLETICS
Women's volleyball middle blocker, Hannah Onyema was one of six Falcons recognized by the OCAA at the end of the volleyball and basketball seasons.

The Ontario Colleges Athletic Association (OCAA) has announced their league awards for volleyball and basketball and six familiar names were part of that announcement. The men’s volleyball team was represented by Tanner Paterson and Evan West while the women’s volleyball team’s sole award winner was Hannah Onyema. As for basketball, on the men’s side Dante Richards and Aidan Whalen were each given an award. For the women, Allison Cotton was their representative.

Paterson won the only major award of all six athletes having won the OCAA West Division Rookie of the Year. The outside hitter averaged 2.4 points per set with 80 total points on 71 kills, five aces and four blocks. Head coach Patrick Johnston said Paterson was phenomenal this year.

“Tanner had a massive rookie season for us,” said Johnston. “We knew he’d be an impact player right away and it’s a shame that his rookie season got delayed a year. The second half of the season he was nearly untouchable, and we can’t wait to see what he’s capable of moving forward. Tanner joins a stellar group of athletes in our program who have been Rookie of the Year.”

The other men’s volleyball player who made Fanshawe proud was West. He was named an OCAA Second- Team All-Star. As a middle, it’s no doubt West led the Men’s Volleyball squad with 16 blocks this season. However, he also averaged 2.2 points per set and added six aces. Johnston also highlighted West’s importance to the team.

“Evan was a late addition to our squad this year, joining at Christmas. He provided a massive boost with his blocking, attacking and serving prowess. He’s typically the hardest working in the gym, leading by example and pushing his teammates,” said Johnston. “If he continues at this rate, there will be more OCAA accolades coming his way over his next three years in the program.”

That’s high praise from your head coach. Johnston not only coached the men this season, but also led the women to a 4-5 record. Johnston said that recruiting was very tricky this past season, especially with COVID, however, he believed they absolutely hit the mark with Onyema. She was named to the OCAA All-Rookie Team and finished second in the OCAA West Division in blocks per set. Onyema also averaged 1.8 points per set, with 27 kills and nine service aces.

“We heard amazing things about Hannah’s athleticism and coachability,” said Johnston. “She lived true to the words of previous coaches and had a breakout season, finishing third in the entire OCAA in blocks. I am very proud of her OCAA All- Rookie Team selection and know she’ll be a force in the OCAA for years to come.”

Unfortunately, men’s basketball head coach Tony Marcotullio and women’s head coach Bill Carriere were unavailable to comment, however, the athletes undoubtedly made them proud this year. Richards and Whalen were both named to the OCAA All-Rookie Team with identical numbers of 17 points per game along with 1.6 steals per game. Cotton averaged a respectable 11 points per game, but was an absolute menace on the court, grabbing the third-most rebounds in the West Division while chipping in on the defensive end with 2.0 steals per game and 1.3 blocks.
Basketball Fanshawe Falcons OCAA Volleyball

Turning Red will turn your head