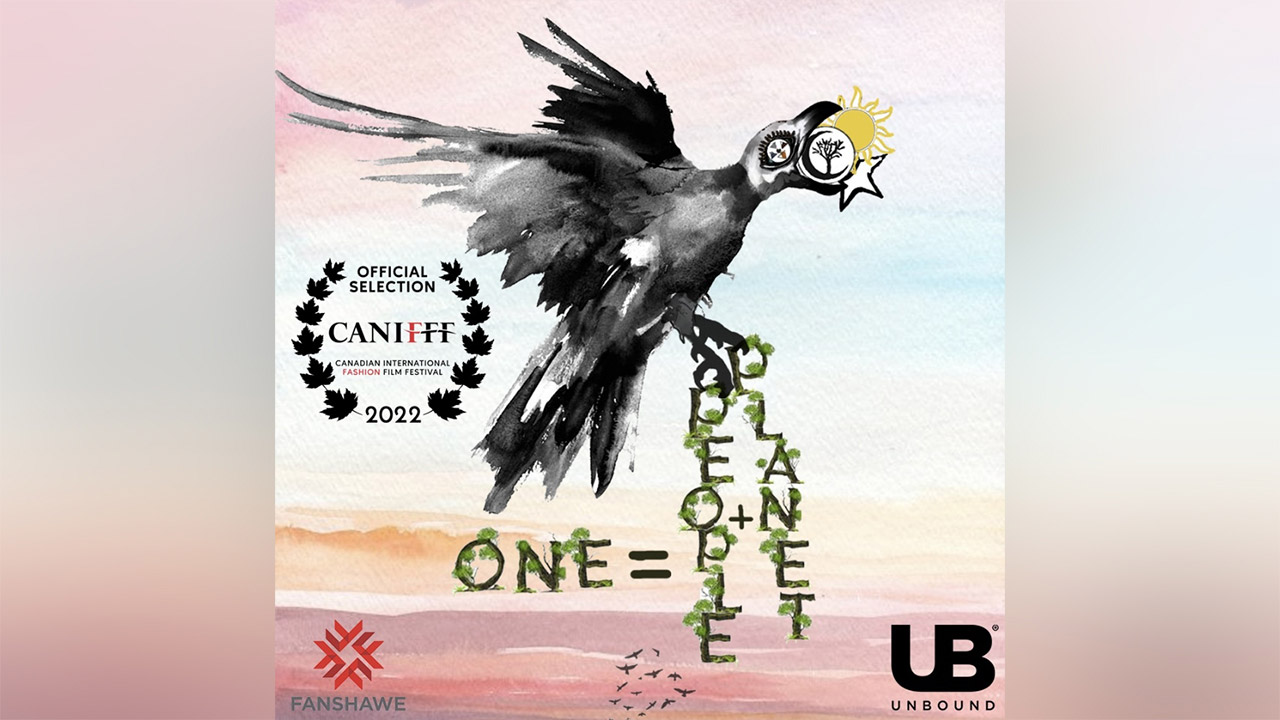 This is yet another nomination Fanshawe has received for their fashion films.

“The ONE film is one of our new sustainable approaches to marketing the social and environmental impact that designers, specifically our Canadian third year fashion designers, are making,” said Loren Couto, professor of Sustainable Fashion Design at Fanshawe and creative director of Unbound. “It is a new direction from what was strictly a runway to now a multi-media marketing branding, which involves not only the film, but a hybrid portfolio event, as well as a magazine.”

Due to the COVID-19 pandemic, the Unbound show had to change.

“Welcome to the silver lining of COVID 2020. With the abrupt closure in spring 2020, we had to shift. I attended a conference on the future of fashion and met with several mentors already in that field and took direction from them.”

Couto took their advice and reached out to Advanced Filmmaking and Video Effects Editing programs for support on their very first sustainable fashion film. Their first film went on to be nominated for three awards and won Best Students’ Eco Film at CANIFFF 2020.

ONE now adds to the list with yet another nomination, being chosen among 700 other films from around the world.

“This particular film was speaking to our new direction for inclusivity and diversity, not only in gender and culture, but also with respect to our Indigenous communities that we had not fully integrated and explored in our program.”

After having several Indigenous students among her classes, Couto said they decided they would embrace the beautiful relationship that Indigenous communities have with the land.

“The film itself was based on a children’s storyline inspired by the Indigenous creation story, the Raven. So, our Indigenous students retold that in a bit of a fashion catalogue and meditation prayer to Mother Earth.”

They had the original One = People + Planet storybook translated by an Ojibwe language speaker, and an alumnus illustrated the fashion catalogue. “We experimented with the idea of a young Indigenous girl that doesn’t appear to be Indigenous. We kind of challenged that concept of visual belonging. She happens to be the daughter of one of our designers and she has long blonde hair, fair skin and blue eyes.”

The girl moves through a dream sequence where she sits and reads the story in front of a campfire, going along with the tradition of storytelling around a fire.

“She moves through the dream catcher and witnesses her relationship with the land and through our travelling with great use of drones and special effects, we move her into the story and she imagines herself in the pages of the book, coming to life in the film as she plays dress up and is seen in the four elements of earth.”

All of the garments are part of the collection from the Unbound fashion show. Couto said this concept was a bit experimental for them.

“We feel that our program is always at the forefront and making sure that we’re current in the world of fashion. We understand that often takes risks and to step out on the ledge to get uncomfortable.

ONE was filmed in Kettle Point and they had a cultural advisory that included north, south, east, and west past grads and alumni that contributed as well. Music Industry Arts students also played a role.

The CANIFFF festival takes places in Toronto Nov. 28-30. There are tickets available to watch the screened film and to participate in the events.
Awards Fanshawe students Fashion Indigenous Movies

1
Growing into your roots
2
Fashion design partners with SILEX, massage therapy
3
No space for Indigenous voices in politics amid Truth and Reconciliation
4
Getting to know local Indigenous artists
5
Fanshawe hosts young filmmaker workshops

The Rings of Power and being beholden to God