Cinema Connoisseur: Leonard takes Cosby to an all new L-E-V-E-L

It's the beginning of a New Year. Here are a few dates that you will want to mark down:

- Saturday, May 5th is the birthday of the Cinema Connoisseur (I'm registered at the Dollarama)

- And last, but not least, Tuesday, December 18th is the 20th anniversary of the release of the landmark film Leonard Part 6, starring Bill Cosby.

A number of things come to mind when the name Bill Cosby is mentioned. Father figure. Creator of “Fat Albert.” Comedy legend. Pudding Pop pitchman. International secret agent. Well, the last one might only come to mind if you are one of the lucky ones to have seen this week's selection, the aforementioned Leonard Part 6.

From the mid 1980s to early 1990s, Cosby portrayed the loveable patriarch of the Huxtable family, Dr. Heathcliff Huxtable, in the quintessential family themed sitcom, “The Cosby Show.” Based on this portrayal, Cosby was like a father to millions of viewers — although based on the number of paternity suits that have been filed against him, that number is more like 40. 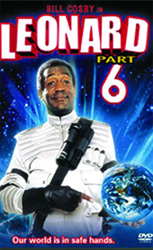 In 1987, Cosby made the leap to the silver screen in the big budget comedy, Leonard Part 6. Cosby takes on the challenging role of Leonard Parker, a former secret agent. The film explains that this is actually the sixth installment in a series of films focusing on the adventures of Leonard Parker. Unfortunately, the first five films have been locked away in the interests of world security. A lot of good that did us.

Leonard retired from the secret agent racket and settled into a new career as a high-class restaurateur. His life takes a downward spiral when his wife leaves him after he becomes too wrapped up in his new profession. Things change when the CIA lures Leonard out of retirement to battle an evil vegetarian who is brainwashing animals to kill people.

Leonard sees this as a golden opportunity to win back the love of his estranged wife. If saving the world from killer frogs can't get him in her pants, nothing else will.

A hero is only as good as the villain that he/she is pitted against, and it doesn't get much better than this film's antagonist, Medusa. When given a name like Medusa, one isn't given a lot of career options. Have you ever met Medusa, the chartered accountant? Or how about Medusa, attorney at law? No, when given a name like Medusa, you are pretty much resigned to life as an evil genius. This particular one also happens to despise meat. That's called character development.

All of this leads to an epic final encounter between Leonard and Medusa. I don't want to give away too much, but suffice to say, Leonard does ride an ostrich, and uses magic meat, which he obtained from a physic, to battle Medusa's vegetarian army.

I know you are going to want to watch Leonard Part 6 as soon as possible. Well, I've got some bad news for you folks. It seems as though Mr. Cosby was such a fan on the film himself, that he purchased the rights to movie, so you will never see this film on television, and will have a hard time finding it anywhere else. Mr. Cosby, did you never learn to share? Will the greed never end?

In fact the only place I have seen this film in the past decade is at the Jumbo Video location on Adelaide Street. They have one copy, and it's been on sale for about a year. Well Jumbo, based on the fact that this column is read by fives of people each week, I'd say you better prepare yourself to ring in a huge $7.99 sale!

I wholeheartedly recommend that you do everything in your power to get your hands on a copy of Leonard Part 6. It takes the best elements of James Bond, “The Cosby Show” and “When Animals Attack,” and creates a magical cinematic potpourri. Mr. Cosby, please open up your heart, and open up the vault — and while you are at it, we sure could use a Leonard Part 7.