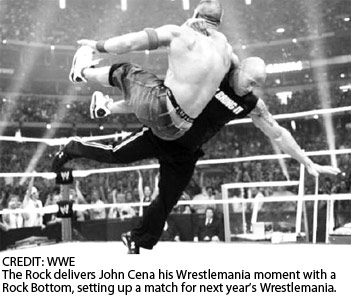 
If you mixed the Super Bowl, World Series and the Stanley Cup playoffs all together, you'd get the biggest show of the year, Wrestlemania 27, which took place April 3 at the Georgia Dome.

In the first match of the night Alberto Del Rio faced off against the heavyweight champ Edge, a title shot which Del Rio had earned by winning the Royal Rumble. All the build-up the Mexican Aristocrat had gotten over the last couple months was for nothing though, as Edge retained the strap by nailing Del Rio with his patented spear. Afterwards, Edge and Christian added insult to injury by vandalizing Del Rio's new Rolls Royce.

Dashing Cody Rhodes, who is wearing a face mask due to a "disfigurement," had a good match with Rey Mysterio. Rhodes kicked out of a 619 and went on to hit Mysterio with a knee brace for the win. Mysterio usually always has a special costume for Wrestlemania, and this year it was Captain America.

The thrown-together team of Kane, Big Show, Santino and Kofi Kingston defeated The Corre in under five minutes. Now they have Kane imitating Santino's trumpet celebration, which could not make him look any less intimidating.

CM Punk came very close to defeating his bitter enemy Randy Orton. Orton's leg was damaged previously by Punk, and this was a weakness that he preyed upon. Punk got a little too cocky, though, and Orton hit him with an RKO as Punk was jumping off the top rope.

Jerry Lawler and Michael Cole, who are both commentators, actually squared off in the ring, with Stone Cold Steve Austin as special referee. Unsurprisingly, Lawler beat Cole rather easily. Lawler and Austin celebrated with some beers, and Booker T thought he'd join the party. Austin did not appreciate the interruption and nailed Booker with a Stunner. The anonymous GM then informed them that he was awarding the win to Cole due to Austin's "poor officiating."

The Undertaker's Wrestlemania streak was never in more jeopardy than now, as he fought Triple H in one of the best matches of the night. Both superstars had amazing entrances, with Triple H using Metallica's For Whom The Bell Tolls as he came out to the ramp wearing a crown and cape, surrounded by warriors carrying shields. Triple H had said previously that he would die trying to end the streak, and try he did, hitting the Dead Man with several pedigrees and even a Tombstone Piledriver, which Undertaker amazingly kicked out of. In the end, Taker locked Triple H into the Hell's Gate submission move, which is basically a Triangle Choke. Triple H held on for over a minute but had no choice but to tap out, leaving Undertaker's streak intact at 19-0.

John Morrison, Trish Stratus and Snooki took on Laycool and Dolph Ziggler in a relatively quick match. Snooki actually surprised everybody by using some backflips and handsprings to pin Michelle McCool. Who knew she had a bit of athletic ability?

In the main event John Cena challenged the WWE champion The Miz. The match ended in a double count-out at first, with both men being down outside the ring. The Rock came out and said that since he was the host, the match would continue with no disqualifications. Of course he used this opportunity to hit Cena with a Rock Bottom, thereby allowing The Miz to retain the WWE title.