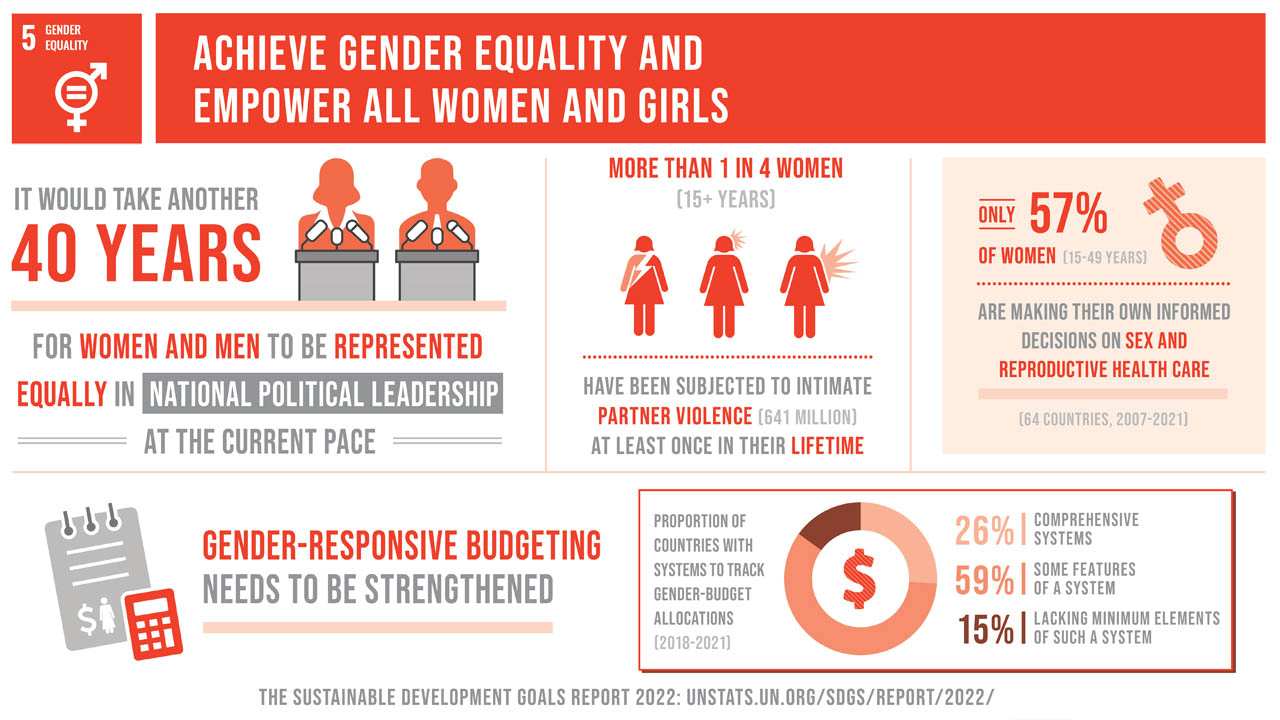 Underpaid, discriminated against, subjected to sexual, physical, and emotional violence and harassment, and denied choices regarding their bodies: the list of predatory practices against women is enormous. Sustainable Development Goal 5: Gender Equality was formulated to address these issues and nine targets have been identified to achieve this goal; there are many hurdles to tackle before success.

Target 5.1 states we must “end all forms of discrimination against all women and girls everywhere.” Unfortunately, this target is far from being achieved. Over the years, there has been substantial progress with regards to women’s rights, and Canada has made great strides. Elsewhere, there has been little effort from global authorities in dispensing equitable policies, while the pandemic and ongoing conflicts across the globe have exacerbated the discriminatory practices against women, further raising the glass ceiling.

According to the United Nations, “over 100 million women aged 25-54 years with small children at home were out of the workforce globally in 2020.”

According to Statistics Canada, in 2021, women employees (aged 25 to 54 years) earned $0.89 for every dollar earned by men in the same role— this emphasizes the economic disparity and unequal power dynamics that exist between men and women.

Another failed area is the issue of women’s safety. Women are restricted and raised to be on the defensive, all the time, to protect themselves. On the other hand, society awards privileges to men and, unlike women, are not constantly directed not to be perpetrators of gender-based violence. Targets 5.2: “Eliminate all forms of violence against all women and girls in the public and private spheres...,” and 5.3: “Eliminate all harmful practices, such as child, early and forced marriage and female genital mutilation” address women’s safety.

Steps must be taken to meet these targets; a 2018 analysis by the World Health Organization (WHO) found that “worldwide, nearly one in three women have been subjected to physical and/ or sexual violence by an intimate partner or non-partner sexual violence or both.”

According to the WHO, “at least 200 million girls and women alive today living in 31 countries have undergone female genital mutilation (FGM).” A UNICEF report projects that “up to 10 million more girls are at risk of becoming child brides by 2030,” as a result of the pandemic. There is much more to be done in this sphere, but weak laws and biased attitudes stemming from a medieval mindset prevent progress. The extent of this bias is even reflected in some of the most common swear words people use on a daily basis.

More can be achieved when women occupy positions of power and have equal say when drafting policies that affect women and girls. Target 5.5: “Ensure women’s full and effective participation and equal opportunities for leadership at all levels of decision-making in political, economic, and public life,” tries to ensure this. Fortunately, there has been an increase in women’s participation in politics— albeit at a slow rate. According to the UN, as of Jan. 1, “the global share of women in lower and single houses of national parliaments reached merely 26.2 per cent, up from 25.6 per cent in 2021.”

We can start acting now by simply being mindful, raising our voices when we see unjust practices, giving space to women to voice their opinions, and, most importantly, respecting and believing women. We need to make efforts to correct the damage done by centuries of ingrained patriarchy and move towards making the world equitable and fair for all. Small steps can take us far, and movements across the globe, past and present, advocating for women empowerment give hope for a better future.

1
The growing spectrum: understanding autism in women
2
Why we need more diversity for women in politics
3
The gender problem in the film industry
4
Gender identity ≠ sex
5
Do students care enough about local elections?