It's Sexual Awareness Week here at Fanshawe, which means that this publication will be chalk full of invaluable information about sexual harassment, contraceptives, and sexually transmitted diseases. So I could not think of a better movie to review this week than a coming of age love story that deals with sex in a frank and serious manner. Plus it has two monkeys in it.

This week's film is the 1982 classic Paradise. 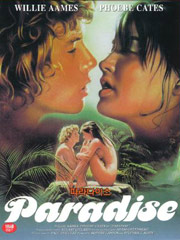 In Paradise, Willie Aames (“Charles in Charge”, “Celebrity Fit Club”) and Phoebe Cates (Fast Times at Ridgemont High, Gremlins) play two youngsters named David and Sarah who travel from Baghdad to Damascus way back in 1826. While they are originally part of a larger caravan, all others in their group are slaughtered by a gang led by the film's protagonist, The Jackal.

The Jackal is a slave trader, who takes a liking to Sarah (Cates), and wants to make her part of his harem. While he already has a flock of women, he doesn't think twice about spending months of his time traveling across the Middle East in what has to be intolerable heat to add Sarah to his collection. Why was he so determined? The answer is because she was played by Phoebe Cates.

Cates was the Jessica Alba or Scarlett Johansson of the early 1980s. Except unlike those ladies, she wasn't afraid to shed her clothes onscreen, provided the role was prestigious enough to justify the nudity. That is why she can be seen repeatedly showering under waterfalls, swimming naked and examining her own developing breasts while being leered at by a monkey. She clearly believed in the film a great deal. Hopefully since her character didn't require much costume, a few extra dollars were added onto her pay cheque. She certainly earned it.

When they are not running away from that pesky and shockingly persistent Jackal, Sarah and David begin to realize that their bodies are changing. Hair is growing where there was no hair before. Without the benefit of cable television, the two are very confused at first about these strange developments. Eventually they figure out how this whole sex deal works, which really helps them pass the time. I mean you can only spend so much time fishing.

Paradise is not only a journey across the picturesque deserts of the Middle East, it is a journey of self discovery. Unfortunately the film has been dismissed by some critics for its high C & A (chimps and ass) quota. Those critics are missing the boat entirely. Sure, the nudity might account for approximately 20 per cent of the film's running time, but every last bit of it is crucial to the plot.

I cannot recommend this film enough. It is an essential learning tool, and I feel that it should be shown in every classroom to teach youngsters about the birds and the bees. It will definitely clear up any confusion they are having about sex. I first saw Paradise when I was 12-years-old. The next day I grew a beard. It's that good.