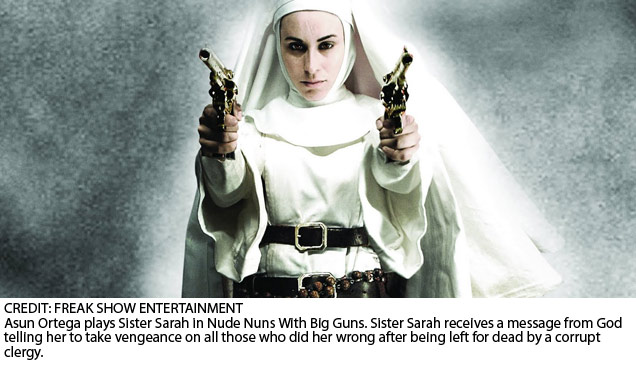 Bless me Father, for I have sinned. It has been a few decades since my last confession.

I have coveted my neighbour's possessions. I made an illegal copy of a Chumbawamba CD. I beat a hobo half to death with his bindle after he defeated me in a game of Yahtzee. I have used the Lord's name in vain. But worst of all, I watched the film Nude Nuns With Big Guns and waited a whole six months before spreading the good word about this film.

So what exactly is Nude Nuns With Big Guns? Well, first of all, it is a very aptly titled motion picture. It does in fact feature a nun with a gun. And this nun does have a habit of stripping of her habit and appearing in the buff. It is an example of the nunsploitation genre of film. And no, I am not making that term up — to my own surprise, it actually exists.

Shortly after taking her vows, Sister Sarah (Asun Ortega) is left for dead after a brutal assault by corrupt members of the clergy. On her deathbed, she receives a message from God. Now, while Jesus Christ was known for telling people to turn the other cheek, readers of the Old Testament know that God could be a little bit more aggressive, as anyone who was a victim of one of his floods or locust attacks will testify to. God instructs Sister Sarah to strike down upon her assailants with great vengeance and furious anger. That is where the big guns come in, as Sister Sarah is armed with some major guns in her battle with the clergy who wronged her, and the motorcycle gang that has been hired to send Sister Sarah to meet her maker.

So I've already gone over the nun and the guns, now let's talk about the nudity. Quite simply, there is a lot of it. However, the Bible itself featured loads of nudity. That Adam and Eve story would never make it past the censors these days. Sister Sarah is simply showing pride in the body God gave her. It would be a sin for her not to be naked, and it would be even more sinful for us viewers to refrain from leering at her.

Once in a generation, a really good religious/firearms movie with copious amounts of nudity is released. Nude Nuns With Big Guns is that film for this generation. If for whatever reason you cannot make it out of the house on Sunday, watching this film is a perfectly acceptable substitute for attending Sunday service. Plus, unlike mass, you don't have to feel awkward about achieving an erection during it. So say three Hail Marys, four Our Fathers and slip Nude Nuns With Big Guns into your DVD player. Amen.