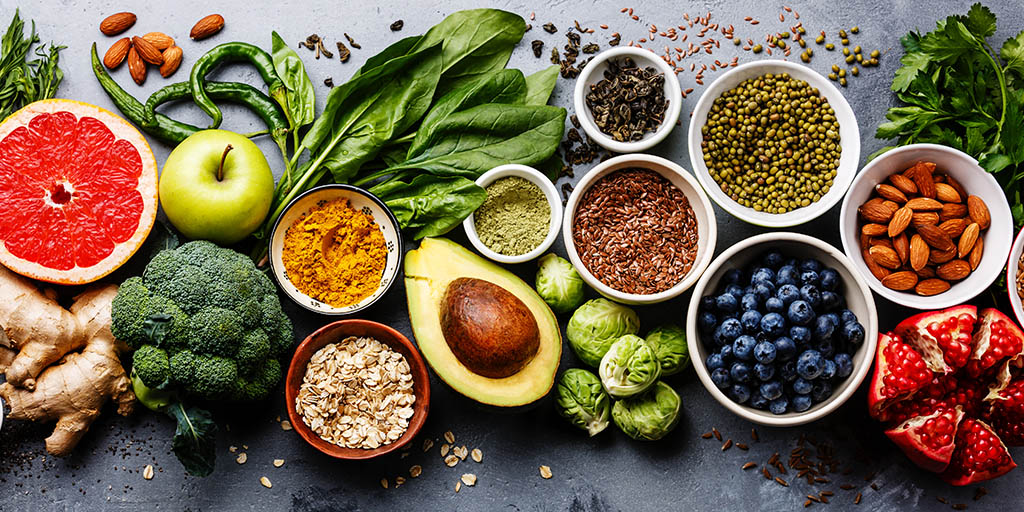 CREDIT: ISTOCK (LISOVSKAYA)
There are bound to be a number of nutrients, like the five above, that you probably don't know exist and that you need in your life.

In the pursuit of achieving a better version of yourself, oneness of the self, or any other iteration of the sense, you likely have come to find that taking care of yourself begins on the inside.

Today, you and I are going to look at five nutrients you likely didn’t know existed and why you should consider them more often when grocery shopping or while stocking up on next months vitamins.

We’ll begin here since ashwagandha isn’t exactly a nutrient. It is, however, an herbal supplement and a very useful one at that. Ashwagandha, otherwise known as winter cherry or Indian ginseng is primarily used as an adaptogen, simply put, stress manager. The root and berry are traditionally used in supplementation and are known to contain anti- inflammatory properties that help with muscle relaxation and swelling reduction. In addition, ashwagandha has also been shown to reduce blood pressure and increase energy.

So, if you find yourself having trouble falling asleep or feeling tense from a stressful day, you can count on your pal ashwagandha to remove that stubborn brain fog that’s hovering over you. And don’t worry, you don’t need to know how to say it for it to work.

Numbers and hyphens now? Okay, what the heck is this. Looks more like the name of a fighter jet, and I agree. But rather than using the scientific terminology (5-Hydroxytryptophan) – HTP is the more suitable for us commoners.

5-HTP is a natural occurrence in the body, taking the form of an amino acid. Our main use of 5-HTP is to produce serotonin, known as the happiness chemical. Serotonin is also crucial in many bodily functions and physiological processes, such as maintaining bone health and healing wounds.

You cannot consume this nutrient from food, on the other hand, you can consume the amino acid tryptophan from chicken, turkey, potatoes, pumpkin, sunflower seeds, seaweed, and others. Our bodies will use tryptophan as a precursor in the production of 5-HTP.

It is also found in supplement form. The uses range from insomnia and anxiety to more notably, having the potential to aid those experiencing depression. Several studies have shown that within two to four weeks, individuals taking 5-HTP have shown improved symptoms of depression and lowered daily fatigue.

I have a question to ask you, do you get enough indoles? Yep, I know, not much of a better name here either. Maybe I should explain first before you answer that question.

Indole-3-Carbinol is what’s known as a phytochemical, basically the good-guy nutrient that is said to help fight off cancer. You’re going to find this nutrient heavily in cruciferous vegetables, it’s actually formed in the process of digestion or cooking, the reaction that occurs when the molecules breakdown.

This is another nutrient that can be found in supplement form, however, before looking into increasing your intake of indoles, be sure to consult your healthcare practitioner if you have a thyroid condition. Phytochemicals are goitrogens, which are known to suppress some thyroid functions.

Only two more to go

You’re doing great, don’t you feel accomplished right now making it this far? If you’re like myself, I always get into new interesting topics I know little about, finding soon after I’m forgetting the names of x, y, and z.

What I’d like you to get out this and carry with you is that nutrition is one of many paths to help improve on ourselves in our day-today. It is something we can control in a world we may not always be able to.

Understanding who you are and what makes you tick is the fundamental stepping stone to finding your sense of belonging with yourself.

Astaxanthin, the hardest to say of the list is actually a very powerful antioxidant. Responsible for the pinkish-red color of seafoods like salmon, trout, shrimp, lobster, and crabs. Astaxanthin has been known to help with energy production in the form of ATP. Additionally, astaxanthin has many cardiovascular benefits such as improved blood flow, lowered LDL cholesterol and decreased blood pressure.

Brains and hearts have a lot in common, one of those things is they love antioxidants. Astaxanthin is one nutrient that really goes above and beyond. In small clinical trials, astaxanthin has shown to slow the cognitive decline of brain aging, and another early study has discussed potential to help with degeneration of eyesight from aging eyes.

Even as a perk, taking astaxanthin orally is shown to help tighten the skin and reduce lines and wrinkles, how do you like that Olay?

You’re able to find astaxanthin as a supplement made from krill, or simply find krill oil at your local health store.

Not a knockoff of the MI6, but still housing a plethora of ammunition. MK-7 is a form of Vitamin K2, known to boost the energy and productivity in brain cells. But let’s not get too side-tracked here, MK-7 deserves the attention.

MK-7 is essentially a super vitamin, it aids in the maintenance of strong and healthy bones, hearts and arteries. The use of MK-7 helps stimulate the transport chain of mitochondria throughout our body and most notably in users’ brains, increasing energy and alertness.

In early studies, this vitamin is also shown to be beneficial in reducing arterial hardness and cardiovascular diseases.

You can find vitamin K2 only in animal-sourced foods like cheese, egg yolk, chicken, beef liver, pork chops, and other similar produce, or in fermented plant foods, such as natto (fermented soybeans).

Likewise, with the majority of the list, MK-7 can be found in a supplement as well at your local health store.
Food Healthy Eating Nutrients

A diva is a female version of a hustler: An International Women's Day playlist