Is there a more useful, talented and likeable celebrity walking the face of the Earth than Paris Hilton? I certainly cannot think of one. So when I heard that Ms. Hilton was following up her hugely successful debut film One Night in Paris with a brand new major motion picture, I was as excited as Amy Winehouse at a crack cocaine clearance sale. Paris Hilton makes her triumphant return to the silver screen in The Hottie and the Nottie, a savagely funny film that teaches the viewer that you cannot judge a book by its cover. 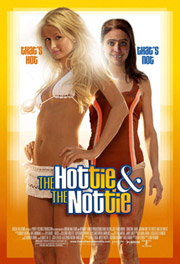 In The Hottie and the Nottie, we are introduced to a down on his luck young man named Nate, who is coming off a string of bad relationships. He comes to realize that the only woman who can satisfy him is Cristabel Abbott (Paris Hilton), who he hasn't seen since first grade. Those other women can't hold a candle to that six-year-old.

So Nate travels across the country to track down Cristabel. Luckily Nate's best friend has been keeping elaborate files on Ms. Abbott over the years, making it easy for Nate to find her. Nate and his buddy aren't the only ones obsessed with Cristabel. She has an army of stalkers, including a creepy albino. I've always felt that there is a shortage of creepy albinos in the movies. Same deal with dwarf mimes. Well, The Hottie and the Nottie satisfies both quotas.

Nate manages to worm his way into Anabel's life, but there is one obstacle — the “nottie.“ You see for any woman to have been blessed with the abundance of good looks that Cristabel the “hottie“ has, there must also be a woman whose appearance is quite ghastly, in order to balance out the universe. The “nottie“ in question is June, Cristabel's best friend since first grade.

Cristabel has made a promise to herself not to fall for another guy until June finds someone as well. Nate takes it upon himself to answer this challenge. This is not going to be easy, considering June has green crooked teeth, a hairy mole on her cheek, severe back acne and an infected black toenail. Plus she's sporting so much fur on her skin that PETA must have boycotted the film.

As the film goes on June's appearance gradually improves, and Nate learns that she has always been a beautiful person inside. Does this sidetrack him from his goal of ending up with Cristabel? You'll have to see it for yourself. Trust me, it will be worth your time and money.

What can I say about the job that Paris Hilton does in this film? I knew she could sing, I knew she could drink and drive, but I never knew she could act on this level. Hollywood's top young starlets, the likes of Natalie Portman, Scarlet Johansson and Ellen Page best step aside. The name Hilton, once synonymous with two star hotel accommodations will soon become synonymous with five star films. Hilton's performance really blew me away, which is just another instance of Hilton blowing someone.

The Hottie and the Nottie gets my highest recommendation. It is a film that will make you laugh one moment and cry the next. The movie also contains a message that we all could learn from. Don't just go after the “hottie.” Go after the homely best friend as well. With just a few thousand dollars worth of surgery, that “nottie” could become a “hottie.” So to be on the safe side, just sleep with everyone, just like Paris Hilton. That is the most important thing you can learn during Frosh Week.